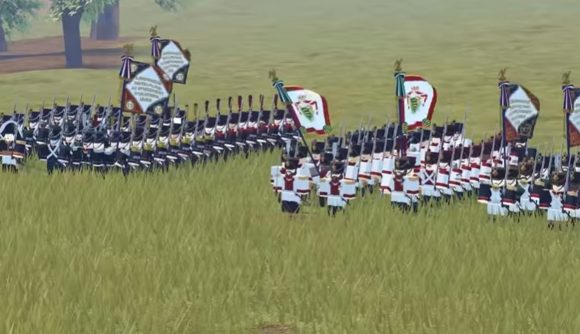 The generally lovely building game Roblox becomes a fully fledged war game in this custom setup based on the Battle of Waterloo. The custom game-type features a to-scale battlefield, and once a month, hundreds of players get together to recreate Napoleon’s historic defeat.

The appropriately-titled Waterloo is a Roblox campaign based in the early 1800s, around the Napoleonic Wars. Per the official description, it’s “a 1,000 man battle fought on a 10,240 x 8,192 studs accurate map of the Battle of Waterloo.” Servers can take up to 350 players, and cross-server play means things can get much larger than that.

On a monthly basis, players come together to form a 1,500 epic MMO game-like play-through of the clash between Napoleon’s forces and the coalition of British and European armies under Duke of Wellington. Each server is given a spot on the map, and everything that happens on one affects the other. The attire is reminiscent of more historically accurate Napoleonic games, and you have to treat it like a hardcore co-op game to succeed, meaning communication and synergy among you and your teammates is pivotal.

YouTuber Pixelated Apollo did a let’s play discussing and showing it off, which you can view below:

We have a list of the best Roblox games, for more blocky fun.