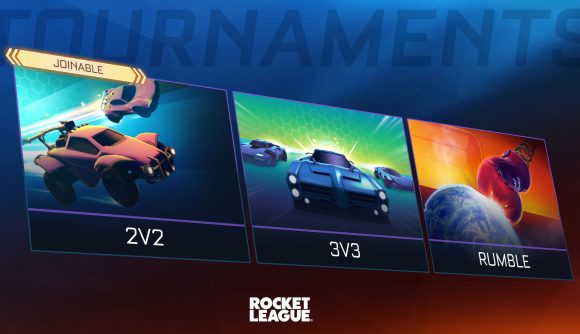 Rocket League’s current season is winding down in the next week, and the next season of the car-based football game is introducing a much-requested feature: 2v2 tournaments. Two-player teams can now compete in 32-team bracket tournaments, and the number of weekly bouts available in each region is getting bumped up as well.

Psyonix is also adding extra modes to tournaments in Season 4. This means that you’ll find Rumble, Hoops, Snow Day, and Drop Shot modes placed randomly throughout the weekly tournament schedule. Standard says your existing tournament rank will determine how you’re placed in these extra modes, but the outcome will not have an impact on your tournament rank.

The idea here, Standard says, is to make the extra modes a more casual way to enjoy the game – without tournament ranks on the line, the theory is players will be more inclined to try out modes they haven’t spent as much time with in the past. You’ll still receive tournament credits and tournament winner titles from the extra mode tournaments, however.

Psyonix says it’s also planning on adding more tournaments this season. In Rocket League, tournaments happen at set times during the week, and that number is increasing from 78 to 143 per week – with more chances to play in tournaments in all territories worldwide.

Psyonix says to stay tuned for more information about what’s to come in Season 4 – 2v2 tournaments are just the start.

In the meantime, you’ve got a week left to earn those Season 3 rewards, so best get on down to the pitch.