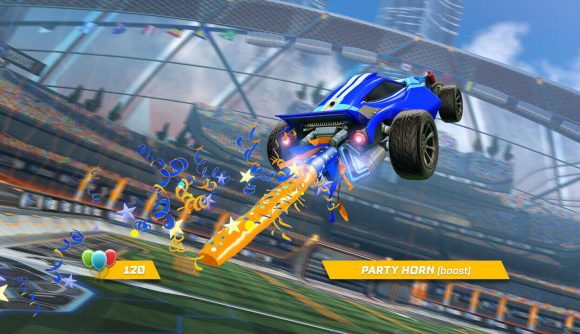 This July, Rocket League is celebrating its fifth birthday, and Psyonix has decided to rev up the celebrations early by hosting a two-week-long event that starts a full week beforehand. New collectibles and modes will be available for players looking to get in on the birthday treats.

The anniversary itself will occur on July 7, but as revealed on the official site, starting June 30 various goodies will begin roll-out. Golden Eggs are making another comeback after appearing last summer, this time letting you win items from any of the first four Champions Series. Matches will start giving out balloons, a special birthday currency, that can be used to obtain an array of new items, like the Psyonix II wheels, and Party Horn boost, and XP packs for your Rocket Pass.

The time will be split between two event modes for the multiplayer game, Spike Rush and 2v2 Heatseeker. Spike Rush is up first, open from June 30 to July 6, then changing to 2v2 Heatseeker from July 6 to July 13, with a redemption period lasting three days after, to July 16.

Rocket League’s turning five on a high note, having broken its own concurrent players record this past March. Unfortunately, this year’s edition of the indie game‘s World Championship had to be cancelled amid the current pandemic, leading Psyonix to invest more in regional tournaments to tide over competitors and fans.