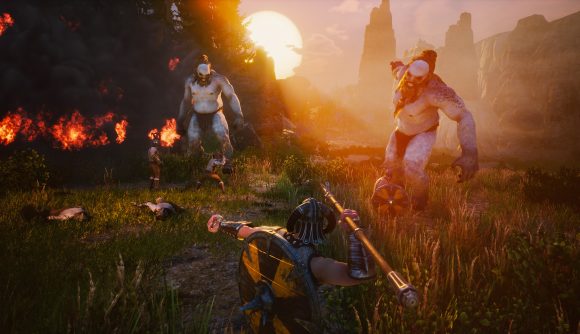 Publisher Ragnarok was taken by surprise when Human Head Studio officially shut down the day after launching Rune II. Ragnarok promptly filed a lawsuit, accusing the studio of breach of contract and willful fraud. The suit seeks $100 million USD in compensatory and punitive damages, as well as all of the assets for Rune II. Now, Ragnarok says it has acquired a hard drive containing the game assets, and so it will be able to continue supporting and developing DLC for Rune II.

“Late last week, we received a hard drive containing the RUNE II assets and source code,” a post from Ragnarok’s development team reads. Dated December 30, the post is brief, but it explains that Ragnarok is currently working with engineers to make sure the drive contains all the necessary game files and assets.

Once that’s done, it says, the team will be able to begin work on a patch that addresses some of the critical issues Rune II players are currently dealing with. Ragnarok has already set up environments for building, testing, and staging new versions of Rune II.

Human Head’s abrupt closure raised eyebrows in November, thanks at least in part due to its immediate reorganization as Roundhouse, a studio owned by Bethesda but operating with many of the same employees and at the same Madison, Wisconsin offices as the now-defunct Human Head.

Ragnarok doesn’t explain how it came into possession of the hard drive containing the Rune II assets, but it will come as a relief to players that post-launch support can now begin. How the lawsuit shakes out remains to be seen.

Rune II is currently available from the Epic Games store.