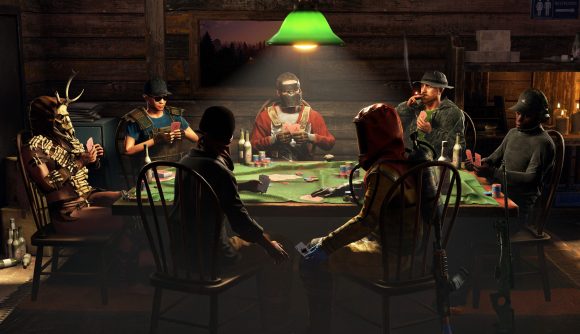 The April update for survival game Rust is on its way, and it’s bringing a basket full of joy and sunshine with it. Well, maybe not those things specifically, but there’s plenty to look forward to in this month’s patch, including a brand new gesture system.

The gesture system uses a pop-up wheel to give you a selection of emotes to use at just about any point in the game. Developer Facepunch says they’ve all been designed to be used in first-person perspective, and that you’ll see a nice animation from that viewpoint when you wave or point at someone. The gestures can also be cancelled at any point, with a tiny time delay of about 0.2 seconds before you can fire your weapon again. “Feel free to wave at your victim when roof camping”, Facepunch suggests.

The April update also adds poker tables to Bandit Town, which Facepunch says completes work on overhauling the casino barge that began in March. Tables support 2-6 players, and you’ll need to put up 100 scrap to sit down. Once you’re in, it’s Texas Hold ‘Em rules all around, and you’ll have a dedicated chat window for the table if you feel like talking a bit of smack to your fellow gamblers.

For the next week, Rust will be running a Twitch drops campaign, which is a chance to earn unique items for Rust by watching several Rust streamers. Those include Dairygold, Tesla, xGuiRy, suspect, NoraExplorer, Picco, PyrooTV, etoleto, and 6zdenko, so tune in to their channels for free Rust stuff. 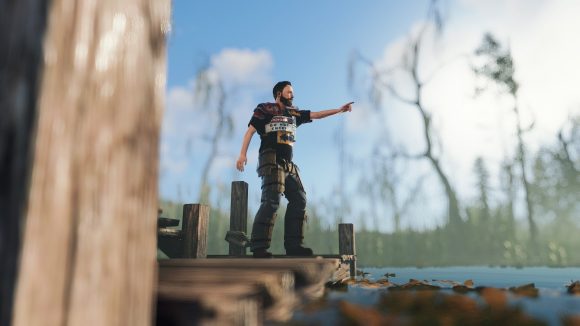 Finally, the Easter event in Rust is all about finding eggs. A new egg hunt runs every in-game day between now and April 8, and each one can be cracked open for prizes that range from scrap to a full-on M249. However, you can also combine 10 painted eggs into a bronze egg, and 10 bronze eggs into a silver egg. The top egg-tier is gold, and you’ll have to do a lot of hunting to get your hands on one of those.

To make things a bit easier, though, there are some new Easter-themed items. An Easter basket allows for instant pick-up of eggs, while the Bunny Onesie and Bunny Ears provide something Facepunch calls ‘Egg Vision.’

You can find out more about the April Update on the Rust blog.