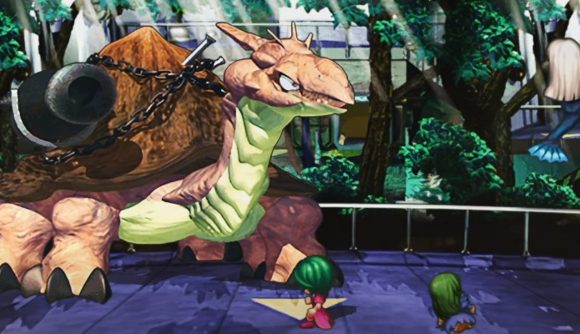 Square Enix is remastering an RPG game from the PlayStation’s heyday, bringing it to almost all modern platforms. SaGa Frontier Remastered will release next summer, giving the original game a fresh lick of paint, and adding new content.

The remaster was announced this weekend, in a trailer revealing the anime game‘s spiffy looking visuals. The chibi-style characters and 2.5D graphical style have been kept, enhanced by sharper animation, and the occasional flare of 3D to add that little bit more charm. New events and cutscenes are included, among them an entire new hero Fuse, who can be played once you finish the game using the seven other protagonists. Some quality-of-life features have been added too, including a 2x-speed toggle, which, if you’ve played the remaster of Final Fantasy VIII, you’ll know can be a life-saver during some parts of these labyrinthine story games.

SaGa Frontier first came out for the PlayStation back in 1997. Like much of Square’s output during this period, it’s a JRPG involving a group of heroes that each has distinct abilities. Where SaGa Frontier stands out is in its non-linearity – it’s a sci-fi open-world game that was quite open-ended for the time, with every character having particular arc to follow, some involving multiple endings. It’s the seventh game in the SaGa series, a Final Fantasy offshoot that began life as The Final Fantasy Legend on the Game Boy, so there’s a lot of shared DNA between the two series.

You can check out the announcement trailer below: