It’s been a long time since the world had a new Sam and Max game, which will forever be some of the best adventure games ever made, so rejoice in the shock news that the duo will get a new adventure next month – and this time it’s in VR.

Sam and Max: This Time It’s Virtual! was revealed late last year and now finally has a release date of July 8 as a temporary Oculus Quest exclusive, priced $29.99. It will then appear later this year on Steam VR and Viveport Infinity, before hitting PlayStation VR in early 2022. There’s a new trailer too, showing what seems to be a tutorial ‘escape room’ area, which the player has to navigate while receiving “helpful” advice from Sam and Max – complete with the duo’s trademark irreverent humour.

On to the important question then: why should you care, as it’s clearly not being made by LucasArts (Sam And Max Hit The Road) or Telltale (Seasons 1-3)? Well, developer Happy Giant was founded by LucasArts veterans, including Mike Levine – who worked on the original classic Hit The Road. Furthermore, Sam and Max creator Steve Purcell is a consultant on all parts of the game – and will actually be voicing a character, too.

It’s certainly a promising time to be a fan of Sam and Max, as along with this new VR game – which is the first new game in the series in over ten years – a complete remaster of Telltale’s Sam and Max: Save The World got released last December. Remasters of Beyond Time And Space and The Devil’s Playhouse will presumably follow soon, then who knows – maybe we’ll get a new non-VR game too. 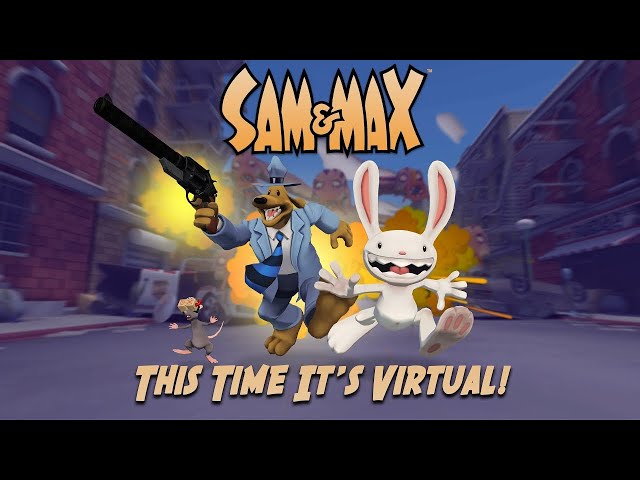 Sam and Max: This Time It’s Virtual! isn’t the only adventure game in VR made by ex-LucasArts veterans either, as Psychonauts in the Rhombus of Ruin came out in 2018 as a prequel to Psychonauts 2 – which is due for release this August.  If you haven’t played any VR games you’re missing out, as there are some truly worthwhile and unique VR experiences out there.