The latest announcement by Samsung that their new GDDR6 graphics memory has gone into full mass production is sloshing more fuel onto the highly combustible Nvidia GPU release rumour fire. Could this mean Nvidia Volta gaming cards are close at hand? We hope so…

This could be the year to update your screen, so these are the best gaming monitors on the market right now.

When SK Hynix announced their own plans for GDDR6 world domination, just under a year ago, they mentioned making graphics memory for a “client to release high-end graphics card by early 2018.” Now Samsung are making similar claims around their own announcement about entering mass production of the next-gen video memory.

“Samsung’s immediate production of GDDR6 will play a critical role in early launches of next-generation graphics cards and systems,” the press release says. “With all of its improvements in density, performance and energy efficiency, the 16Gb GDDR6 will be widely used in rapidly growing fields such as 8K Ultra HD video processing, virtual reality (VR), augmented reality (AR) and artificial intelligence.” 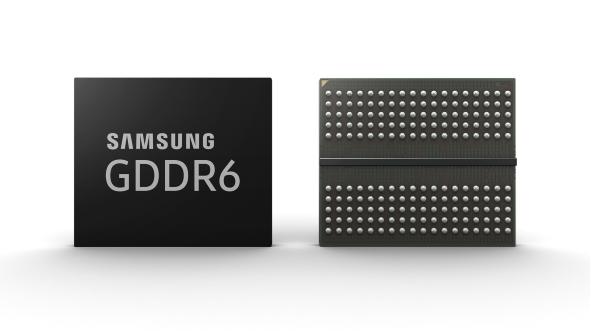 As yet we don’t know which memory manufacturer Nvidia are going to use for their next generation of graphics cards, presumably based around the Volta architecture, though if the issues that people had with the Micron VRAM in the GTX 1070 is any indication Samsung might be the preferred choice…

We’re pretty confident neither SK Hynix or Samsung would be referring to their new GDDR6 video memory going into something from AMD, at least not this early in the 2018. We’re still doubtful about seeing any new consumer-facing graphics cards from AMD this side of Navi next year, and the AMD Vega cards we were hoping were getting a refresh would be rocking HBM2 anyways.

So they’ve got to be talking about new Nvidia GPUs, right? They have to release something this side of Computex, or it’s going to be a really dry start to 2018.