The new Intel Coffee Lake CPUs are here. There are some stunning gaming chips among them, but damn, they are hard to get hold of right now. That’s going to be the case for months, so a pre-built Coffee Lake PC is likely to get you one of Intel’s six-core stunners quicker than if you try and upgrade.

You’ll need a quality screen to go with your new PC, so check out our pick of the best gaming monitors around today.

As Intel brought the release forward by such an unprecedented amount of time, there was precious little CPU stock available at launch, with even the biggest retailers only getting a handful of each Coffee Lake SKU. Stock isn’t expected to start trickling back in until mid-November, with free-flowing availability likely to be held up until December.

A lot of those chips are going to be used to fill out the orders of pre-built machines that system integrators are putting together, rather than necessarily being made available for upgraders. 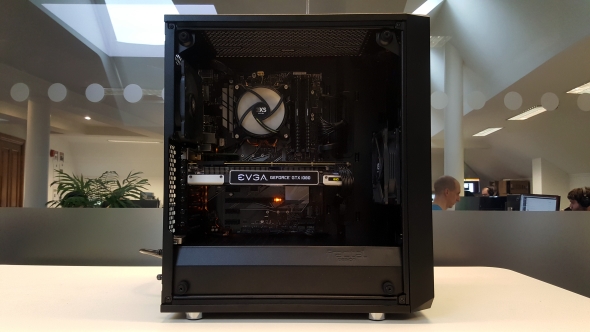 But due to Intel’s backwards compatibility nixing reliance on the Z370 chipset as the only motherboards on offer, every Coffee Lake purchase is going to need a brand new board to go along with it. And that means both a sizeable initial outlay, and a pretty invasive bit of PC surgery you’re going to have to perform on your current rig, if you want to go down the Coffee Lake upgrade route.

It might be time to think about picking up a whole new system and starting afresh, then.

To that end, Scan have introduced a 3XS Gamer system with a high-end spec, but zero extraneous fat. Unlike yours truly. At £1,650 the build is a little on the pricey side, but everything they’ve chosen to fill it out with is there to make good with the gaming, without unnecessarily adding to the cost.

Instead of the expensive, overclockable Core i7 8700K, Scan have dropped in the straight Core i7 8700 chip. It’s still got a decent Turbo clockspeed, the full six-core, 12-thread configuration, and all that lovely L3 cache, too. And, because it’s not an overclocker’s chip, they need only a lightweight CPU cooler to keep it in check.

Ideally, the 3XS Gamer would have been sporting a H-series motherboard, but with the launch of the non-overclocking chipset limited to early next year, we’ve got the next best thing: a budget Z370 in the shape of the blessedly RGB-free Asus Prime.

With 16GB of RAM, a 250GB SATA SSD, and a no-frills Fractal Design chassis, Scan have been able to spend the meat of the machine’s price tag on the graphics card. 30% of the cost is taken up by the overclocked EVGA GTX 1080 card inside the 3XS Gamer.

And, together with the six-core, 12-thread CPU, that’s why you get such hefty benchmarking figures out of the Scan machine.

We’ve got it going up against another Coffee Lake machine, the Core i5 8600K-powered Infinity X88 GTX Elite from Cyberpower, with a GTX 1060 inside it, costing £999. We’ve also put it against a Skylake-X eight-core rig from PC Specialist, which is almost £1,000 more than this Scan build, and you can see that it doesn’t really net you a whole lot more performance. The difference between the two Coffee Lake builds is much more stark, though.

One of the most telling benchmarks is the memory bandwidth performance. It’s not necessarily indicative of the hardware, more about the approaches of the different system builders. The Scan build is very price-sensitive, cutting unnecessary extras where possible – such as an RGB board, water-cooler, and NVMe SSD – but unlike the other companies they’ve recognised the importance of utilising the memory channels on offer. 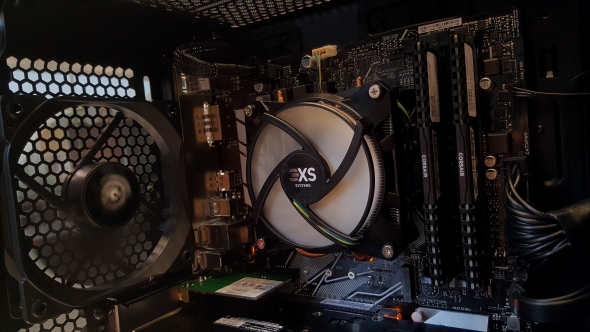 The PC Specialist Vortex 2500 and the Cyberpower [unnecessarily long PC name] systems have opted for cheaper memory kits, which instantly halves the potential memory bandwidth of the machine. That’s a build choice – or a build error – which is a real anathema for me right now.

The Cyberpower Coffee Lake rig, with its classic i5 / GTX 1060 combo, is a more reasonably priced machine, and still delivers decent gaming performance, but the Scan 3XS Gamer is a smarter, more balanced build. There’s nothing in the system that’s in there any other reason than to make the rig as lean and gaming-mean as it could possibly be.