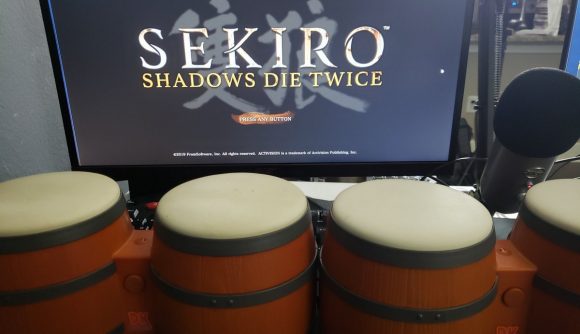 Inevitably, every FromSoftware game is eventually beaten in some absurd way, using non-standard input devices like Guitar Hero controllers or, I don’t know, a potato. It’s already happened with Sekiro: Shadows Die Twice. A game developer who likes to stream in his spare time has completed Sekrio using a pair of Donkey Kong bongos.

ATwerkingYoshi is responsible for a lot of the stranger controller schemes out there, and he picked a real doozy for one of the year’s most technically challenging games. He’s posted a video of himself using the drums to take on Isshin, the Sword Saint, and it’s quite a thing to watch.

Of course, this isn’t particularly new territory for ATwerkingYoshi, who currently holds the world record for “Most Controllers Used to Beat Dark Souls 3.” According to his Twitch page, he’s beaten the game with controllers shaped like a fishing rod, a single Switch joycon, a DDR dance pad, and a Resident Evil 4 chainsaw controller.

The DK bongos are kind of a different story, though, because looking at them, you wouldn’t expect them to be capable of precise inputs – which is sort of Sekiro’s big thing. But it turns out, if you know enough about them it’s possible to get them to behave just like a regular controller.

Still, I was skeptical, even after watching some of the video below. Fortunately, ATwerkingYoshi has posted a gallery that shows how his custom bongo-based setup works over on imgur. He finished the game in 10 hours and 131 resurrections, he says in a post today on Reddit. 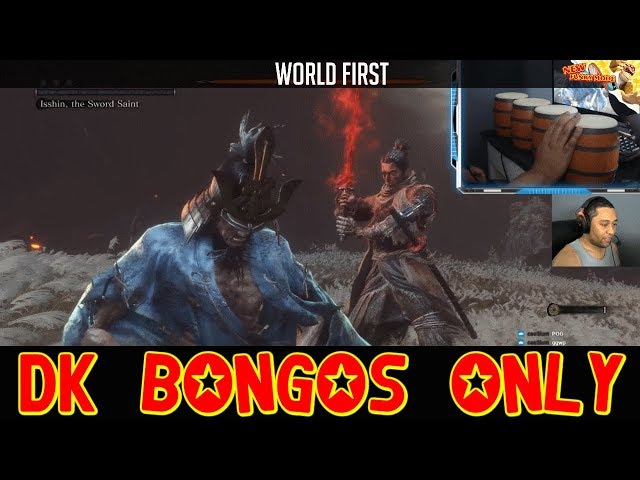 He had to give up the ability to control the camera, which again seems like kind of a big deal. But it was all in service of testing his theory that Sekiro is actually a rhythm game, and that it would make sense with a percussion-style input.

Study the blade: Ten of the best samurai games on PC

It’s incredibly impressive to see something like this actually work, although I’m not sure I’d have gone the same route if I were going to spend this much time with a set of drums. I’d probably have been more inclined, personally, to learn how to play Neil Peart’s solo from YYZ or something.