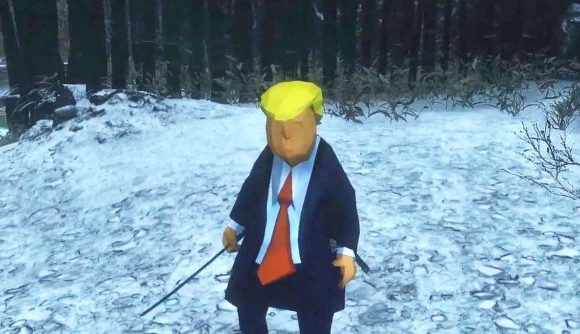 Of all the possibilities you envisioned when taking on Sekiro: Shadows Die Twice, I bet haring around as a low-poly version of the Leader of the Free World wasn’t one of them. Now, courtesy of the Trump Mod, by skymoon, this is an opportunity ready for the taking that promises to put the presidency in your campaign.

Rendered in little more than a handful of pixels, Mr President himself is identifiable by his yellow hair, giant red tie, and fervent determination to make Japan great again. Armed with Sekiro’s signature weapons, Kusabimaru katana and Shinobi Prosthetic arm included, Trump is mapped onto Sekiro’s body pretty well, so much so that you might find yourself quickly transported into a world where the President seems a perfectly fitting substitute for Wolf in taking on the armies of the Ashina Clan.

Don’t believe me? Take a look at Trumpkiro in action in the video below. It’s a bizarre but oddly cheering spectacle, which should take a little of the sting out of being mercilessly cut down between Idols for the twentieth time.

If nothing else, just running, jumping and climbing your way through the hostile landscape of Sengoku-era Japan like a pixel-challenged, President-shaped boss is something clearly well worth experiencing.

The Trump Mod is the latest in a recent flurry of very entertaining Sekiro mods, such as one which has Hidetaka Miyazaki’s face pop up to mock you when you die, and another which swaps out the Great Serpent for Thomas the Tank Engine.

You can grab Trump from Nexus Mods now.

If the thought of a blast through Sekiro as a blocky interpretation of the 45th President of the United States inspires you, check out our Sekiro bosses guide, Prayer Beads guide or Divine Confetti guide to help you take on your next venture as a presidential pro.