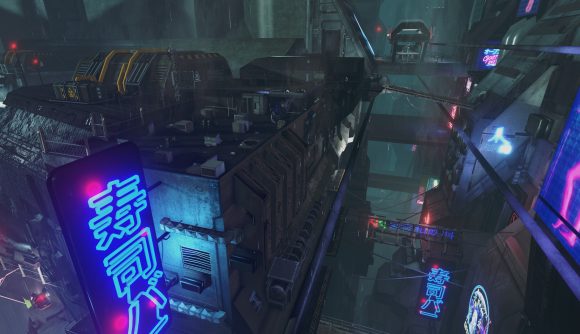 As we all eagerly await the Cyberpunk 2077 release date, here’s a mod that turns Serious Sam 3 into a cyberpunk game. The full conversion mod transforms the FPS game into a survival game based in the world of Blade Runner.

Set in the 2020s Los Angeles of the movies, Blade Runner: Cells Interlinked 2021 follows Trixie, a prototype replicant, and Ren, a lowly Tyrell Corp technician, as they try to escape the city after Trixie escapes her laboratory. Chased by two rival corporations, blade runners, and the police, the two have to navigate the dystopian neon nightmare in the hopes of eventually finding freedom. So far, so Blade Runner.

A trailer for the project shows off the impressive looking alt-future LA, featuring voice-over from the actors playing Trixie and Ren. The snippets of gunplay have this closer to a stealth game than the usual bombast of Serious Sam, featuring tight corridors, small rooms and so on. Sure enough, the description on Steam from creator Syndroid says “Don’t expect Serious Sam type of gameplay”. Around 90% of what’s here is custom content, and the whole thing lasts around 90 minutes to two hours.

Although a fangame, the creator does place this within the Blade Runner timeline, taking place before Black Out 2022, an animated short film that was part of a series of preludes leading to Blade Runner 2029. This puts it two years after the first film, and right before the replicant ban that brings us through to 2049 is imposed. No doubt there’s plenty of references and nods here to satisfy diehards for the universe.

You can get Serious Sam 3 BFE on Steam here. Our Ian Boudreau reviewed Serious Sam 4 and loved it, so do check that out if you want more pure Sam action.