It was probably around midnight when I heard the door to my office softly shut behind me. My partner, as it turns out, had hit her limit on the amount of yelling she could tolerate. There had been a lot of it as I’d made my way through the streets of Rome and the hills of rural France, and fans of Serious Sam will know the particular yell I mean right away: it belongs to the guy with no head, holding two bombs, who runs straight toward you, screaming in that one-note drone.

Serious Sam 4 is a no-frills entry in one of the oddest but most enduring series in shooter history. The fourth main sequence game does very little to modify the formula established in Croteam’s original Serious Sam, and the result, frankly, is glorious.

Serious Sam 4 has the same janky energy it always did, the same bonkers non-plot that sees Sam and his friends blasting alien creeps away by the hundred in various real-world locations, and the same raw shooter mechanics that have always made it a reliable FPS series. Serious Sam 4 is elevated not by rethinking the fundamentals, but by slapping on a new lick of HD paint and providing arena after arena of grueling combat, as well as some genuine laugh-out-loud writing.

I’m not exaggerating even a little when I say that Serious Sam 4 is the funniest game I’ve played in years. ‘Serious’ Sam Stone is as ever a fount of one-liners, and these hit way more often than they miss. But he also manages to pull off the gravelly voiced Videogame Hero thing by playing against type: he may joke around a lot, but Sam’s never flagrantly abusive. When rookie Kenny finally manages to land his own well-timed pun during one of the game’s absurd gun fights, Sam’s there to cheer him on. Sam Stone manages to be hilarious in a way Duke Nukem has never even approached, all without being a completely nauseating person. Who’d have guessed? 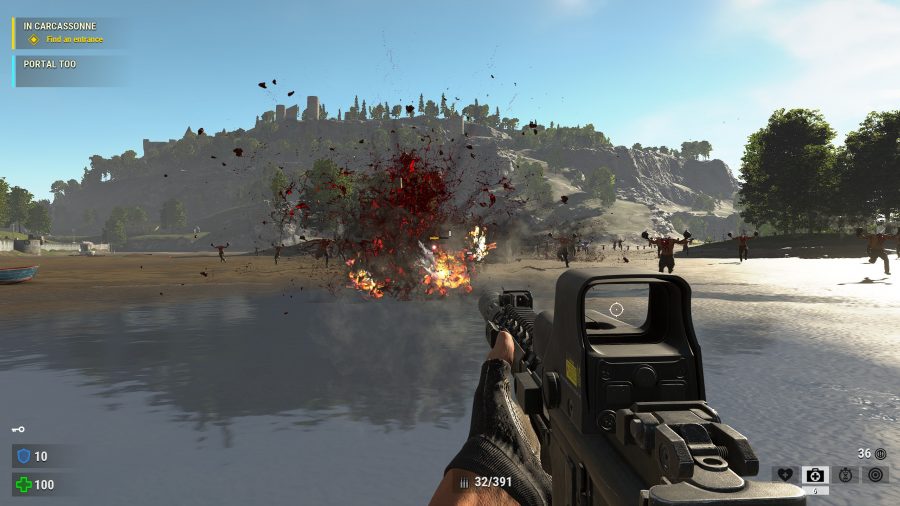 So Sam is downright charming, and the laughs are great (there’s a throwaway line during a boss fight in the Roman Colosseum that forced me to pause the game and step away to compose myself, I’m not kidding). Ultimately, though, those are icing on a cake, and that cake is made of guns.

Where Doom and Wolfenstein have become examples of modern design recapturing the feel of classic shooters as you remember it, Serious Sam 4 is instead an exercise in careful curation. The things that worked in the original Sam haven’t been touched, and the added elements consist mainly of new guns and new enemies that work well together with what was already there. The Beheaded Kamikaze is still here, and still funny, but it also still works well to keep you from getting too focused on long-range targets or settled into one position. Kleer Skeletons, which charge toward you and then leap for a claw attack, can also be heard from a distance and are too fast to backpedal away from for very long – you have to turn, run, find a piece of scenery around which to make another sharp turn, then catch them from behind with a well-placed shotgun blast once they’ve made their leap. Enemy hordes tend to contain smart mixes of ranged and melee attackers, and each level gives you a chance to learn new enemies’ behaviour before shoveling hordes of them at you all at once.

As goofy as Sam’s enemies tend to look (the Gnaar in particular could’ve been lifted from a Bugs Bunny cartoon), they all serve distinct roles in the massive battles. Waves upon waves of them come barreling over sunny hillsides or around blind corners in sewers. Fights are lengthy and often difficult, and it’s a damn good thing Sam has a selection of room-clearing gadgets to complement his arsenal of shotguns, grenade launchers, and miniguns. When Serious Sam 4 hands you a crystallised black hole fragment, it’s not simply giving you another kind of grenade – that thing will tear open a hole in the fabric of space-time that sucks in everything that isn’t nailed down. Seriously. 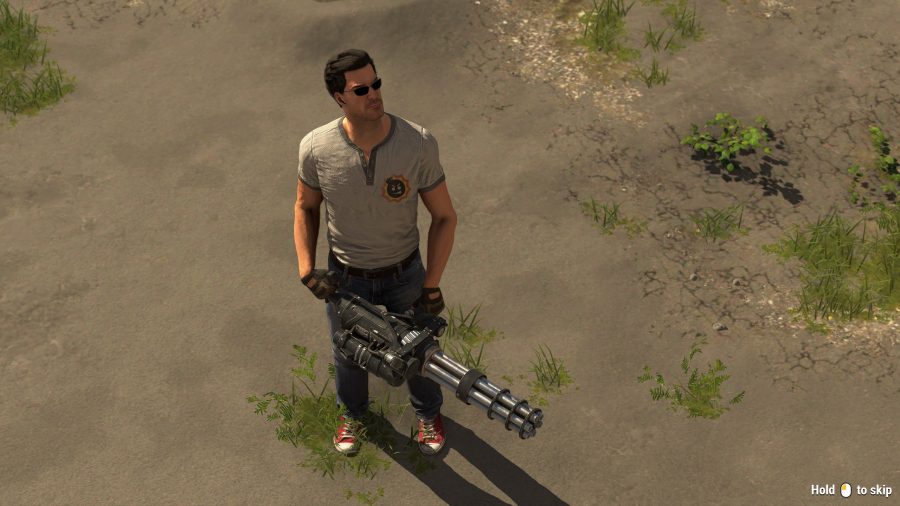 Sam’s conventional weapons all have their own distinct roles to play as well. While at first it may seem redundant to have both a sniper rifle and the much more powerful scoped Devastator that shreds through enemy armour, the sniper rifle’s high-velocity rounds are irreplaceable when you’re up against flying enemies like witch brides and harpies.

There’s a new skill tree that lets you unlock special abilities, like using certain bits of scenery as weapons or one-hit melee finishers on larger enemies, and Sam can find additional deadly gadgets by pursuing optional side objectives, which are always worth doing.

There’s always a tool for whatever job Sam’s up against, but Serious Sam 4 winds up feeling less prescriptive about its combat encounters than Doom Eternal does. The giant, open arenas allow you to kite herds of enemies around, unleashing torrents of minigun fire or automatic shotgun blasts into the crowd as you desperately hope you remember where that rock formation you passed on the way in was. Sam may not have the graphical panache of the modern Dooms, but it’s no less intense when it’s firing on all cylinders, which it generally is.

It must be said, though, that Sam is showing his age. High-res textures sometimes serve to highlight crude character models or janky animations. While rescuing a pair of besieged snipers near Carcassonne, I stumbled through a chapel wall that was missing its collision detection. And when you’re driving anything that isn’t a Vatican mech, the game can feel as dated as Sam’s boot-cut blue jeans.

That’s not to say that Serious Sam 4 is ugly. While there’s a certain B-movie grunginess to the animations and models, there are some gorgeous scenes. Sunset on the Tiber and the approach to the Colosseum in Rome are beautiful moments, and the fortified castle at Carcassonne almost feels like a virtual tour of the real-world location at some points. The major landmarks Sam visits are pretty spectacular, and the fact that you get to splatter them all with gallons of goofy alien gibs is an absolute treat.

It's the most fun I've had with a shooter in years

Serious Sam 4 also includes a co-op mode, which I was able to try briefly. You and up to three friends can hop into any level you’ve unlocked together, with enemies getting slightly beefed up health bars to compensate for additional Sams. The game crashed perhaps 15 minutes into my co-op session with my brother, and again later on as I played on my own, but Croteam says it has a day one patch lined up to address a couple of outstanding technical issues.

Serious Sam 4 has its flaws and doesn’t go to any great lengths to hide them. But even considering those, it’s still a ridiculously enjoyable experience. It may not be everyone’s cup of FPS tea, but it’s the most fun I’ve had with a shooter in a very long time.

Delightfully chaotic and ruggedly lovable, this is a decidedly old-fashioned shooter that succeeds on the principle of 'if it ain't broke, don't fix it.'