Japan’s big electronics show, CEATEC Japan 2016, is bringing all the tech to Tokyo this week and home-town heroes Sharp have shown off a chunky prototype 8K monitor.

It’s going to be a while before 8K panels hit our desktop so if you’re after a new screen check out our pick of the best gaming monitors of today.

I thought I was genuinely getting closer to seeing the perfect monitor – after all we’ll have Quantum Dot GSync screens from Samsung next year – but this 8K monitor has appeared in a show report over at PC Watch and given me a new object of desire.

With a massive native resolution of 7,680 x 4,320 this 27-inch prototype may not be much of a looker in itself, with its almost CRT stylings, but you’re not going to be paying any attention to the surrounds with that panel up and running.

It’s not actually the 8K resolution that’s the most interesting thing about this new Sharp monitor, however, the IGZO IPS panel is also capable of supporting HDR and comes with a 120Hz refresh rate. 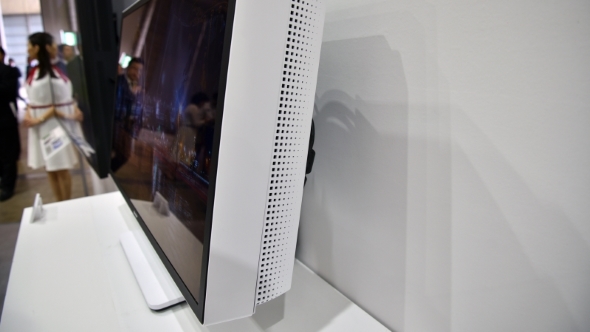 Indium gallium zinc oxide (IGZO) is an alternative semiconductor material to silicon, and Sharp have used it here to create the IPS panel because it has better conductivity at smaller sizes. And with an 8K panel of just 27-inches those pixels are really tightly packed in. A silicon-based panel design alternative would need a much stronger backlight to light the display. IGZO panels also offer lower energy requirements and can operate quicker to facilitate the higher refresh rates Sharp have planned in for this prototype screen.

As well as being ultra dense, super-quick and incredibly high-res, the prototype has that tantalising HDR feature too. And with a peak luminance of 1,000cdm2 this screen is going to be capable of some incredible feats of imagery. Your desktop monitor will be lucky to top 350cdm2 by contrast and what a contrast it will be.

But considering Sharp’sIGZO IPS 8K TV went on sale for 16million Yen – which translates to around $132,000 or £86,000 – don’t expect a reasonable price tag for this one once it enters actual production volume…