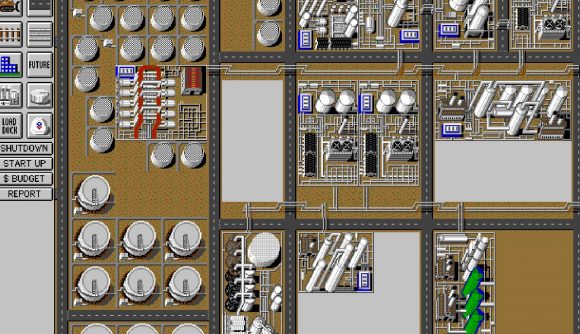 June 5, 2020 SimRefinery is now available for download from the Internet Archive.

Phil Salvador is a librarian who specialises in strange old games, and he’s written a fascinating history of Maxis Business Simulations, a division of Maxis that was spun off from the main company after the runaway success of its breakout hit SimCity in 1989. The whole thing is worth reading, but what may be of particular interest is the section on SimRefinery.

The idea behind Maxis Business Simulations, Salvador writes, was to create powerful simulations that could be used by industries as instructive tools. That wasn’t a particularly new idea, even at the time, but what Maxis could add was the ‘fun’ element – the notion of being able to learn through play. Chevron approached Maxis about creating an oil refinery simulation, and the result was SimRefinery.

Maxis Business Simulations may have been ahead of its time – perhaps too ahead of its time. Chevron, which had ordered the software in the first place, never wound up adopting SimRefinery at a large scale, although copies floated around various industries and academic departments for years after Maxis finished it. One of those copies has now made its way to the Internet Archive, where you can download and play it right now.

As Salvador shared his newly-published article on Twitter, it attracted a flurry of attention. It caught the eye of Jason Scott, a digital historian who works for the Internet Archive – and one of Scott’s followers seems to have been connected to someone who still had access to a diskette copy of SimRefinery.

Scott posted a photo of the 3.5″ floppy May 20, saying it would be uploaded to archive.org. And sure enough, that’s what happened – the anonymous Ars Technica reader who had the diskettes uploaded their contents to the Internet Archive. That’s where you can also download an interactive walkthrough demo of Project Challenge, a 1996 project management training game that was built by Thinking Tools, the company that emerged from Maxis Business Simulations when it parted ways with Maxis to become its own entity.

To run the game, head to the Internet Archive. You can download the .zip file and try to make the game work offline, but the easiest route is to use the browser version of DOSBox that’s running right on the page. First, ‘install’ the game – you’ll see a list of files being unpacked. When you see the C:\> prompt, type intro, and you’ll be treated to a virtual ‘class’ on SimRefinery’s features. Then you’re on your own – run your little refinery however you see fit.

For more mainstream classics, check out our list of the best old games to play on PC today – there are some gems in there that still hold up very well.