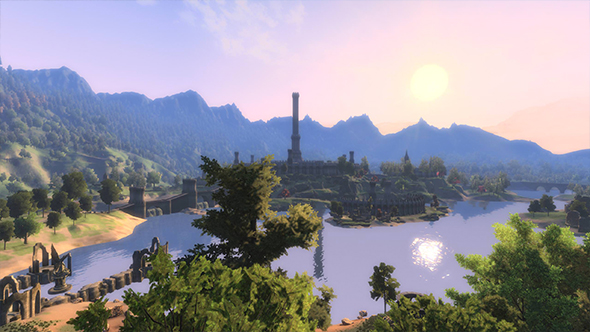 We’ve seen several high-profile total conversion mods for Bethesda games in the last few months, including separate efforts to bring both Fallout 3 and New Vegas into the Fallout 4 engine. It’s been a while, however, since we’ve heard from the folks behind Skyblivion, but they’ve just provided an impressive new trailer showcasing their work converting Oblivion to the Skyrim engine.

Have a look at our favorites with the best games on PC.

A new trailer showcases the Imperial City and locales all around Cyrodiil, and they’re all looking positively radiant. Weather’s been built up to match the more vibrant aesthetic of Oblivion, and the video comes at the tail end of implementing redesigned trees and grass across the open world.

More specific gameplay elements will be showcased as part of an upcoming charity livestream, which the developers are hopeful will help turn some of the goodwill toward the project into donations for cancer research.

As it stands, we’re told “the end of the project’s development is in sight,” though still some ways distant at this point. Lead developer Kyle Rebel says on Reddit that an “ambitious personal goal” would be having the mod ready to release, but that depends entirely on how many volunteers they’re able to bring on via the latest update video, as the project needs more artists and coders to amp up production.

We first heard about Skyblivion way back in 2015, but attention for the project amped up with a similar trailer revealed last year. If you’re interested in finding out more – or you want to help bring the mod to life – you can check out the Skyblivion site here.