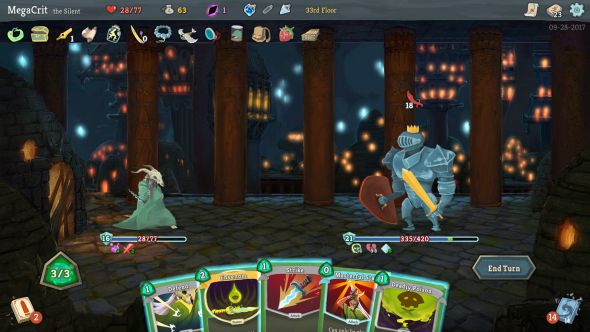 The delightfully compelling deckbuilder-meets-roguelike Slay the Spire now has more for fans to do, adding a daily challenge mode with some interesting twists.

Find out why Ali thinks Slay the Spire has more in common with Pokémon than Hearthstone.

Patch 14, which dropped yesterday, adds the Daily Climb to the game. As other popular roguelikes have done in the past, this will use the same seed for all players, giving everyone roughly the same challenge.

However, each Daily Climb will also throw in several modifiers for each daily challenge. The patch notes include icons for 15 possible modifiers, such as one where encounter types are hidden on the dungeon map. Others up the prices charged by the merchant, or have you begin with two cards from a different class.

Mega Crit Games say the mode is still a work in progress, and that players should expect changes, including the addition of leaderboards and adjustments to the modifiers – which makes sense, since the game itself is still in Early Access.