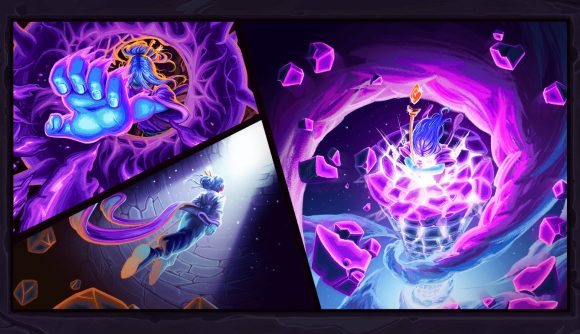 We haven’t checked in on Slay the Spire for a while, but that hasn’t stopped Mega Crit from continuing to add to and tweak its excellent deck-building game. A patch released this week moves The Watcher, a brand new character, out of the test branch and into the main one, which is now known as Slay the Spire 2.0.

The addition of a new playable character to Slay the Spire is hugely significant, since each character is essentially its own game – they all have their very own sets of cards, and the Watcher brings her own with her. The Watcher is a blind cleric whose playstyle is based around previewing upcoming cards, and she can use miracles to change the outcome of battles.

The Watcher has been in beta testing since September, so Mega Crit has had time to watch how players take to the new playstyle and adjust where they’ve found weaknesses or overpowered, broken cards. But the studio has also been doing the same for the rest of the game, and version 2.0 brings a substantial list of changes, balancing tweaks, and new items to Slay the Spire along with it.

Among the new features is the Potion Lab, which lets you review all the potions you’ve found in your runs through the Spire. You can find that alongside your Card Library and Relic Collection.

Speaking of potions and relics, by the way, there are more of both of those to be found in Slay the Spire 2.0. The Ironclad has two new potions, the Elixir and Heart of Iron; the Defect gets the Potion of Capacity and Essence of Darkness; Silent will be able to find the Cunning Potion; and the Watcher now has access to the Bottled Miracle, Stance, and Ambrosia potions. The Potion Lab also includes the rarities of each potion in the game.

For more like Slay the Spire, check out our list of the best card games on PC.