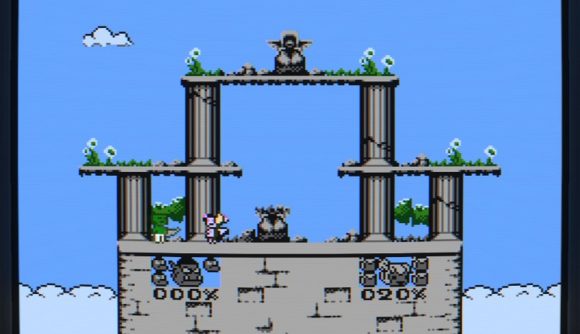 The NES celebrates its 35th anniversary this year, and despite being over three decades old, people are still finding innovative ways to use the technology. One developer has made a multiplayer game that you can play online on the system, using some contemporary hardware tricks.

The game is Super Tilt Bro., an 8-bit demake of Super Smash Bros. that you can play in your browser on Itch here. Just like in Smash, the fighting game involves battering your opponent until you can knock them out of the arena. Each players starts with a certain amount of lives, last one with any left wins. For an 8-bit approximation, Super Tilt Bro. gets all the basics right, with four stages, two characters, an assortment of outfits, and some smooth platforming and fighting.

The exciting part is the physical version: a NES cart featuring a built-in WiFi chip, so you can connect to the world-wide-web through your decades-old console and play someone online. They’re only in the prototyping stage so far, and developer Bidon encourages anyone who wants to be among the first to get one to join the community Discord, where you can also find other players for online matches through the alpha version that’s publicly available.

You can watch a fancy trailer below that contains some footage of a test cart in action on a console and CRT TV. The whole concept is pretty wild, that it’s even gotten as far as prototyping really says something about the endurance of Nintendo’s early home gaming technology.

Super Tilt Bro. joins a growing lineage of demake projects from hobbyist developers, another being Yarntown, a 16-bit version of Bloodborne. If you want more Smash-like action on PC, Bounty Battle might just be the ticket.