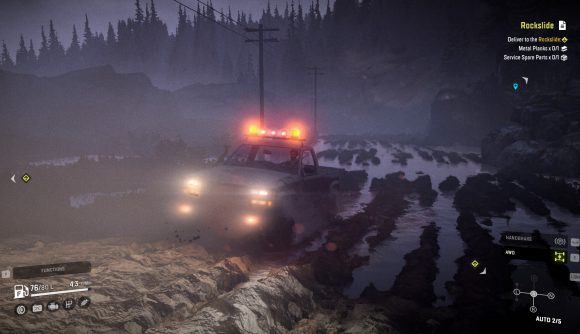 There’s a lot to be said for SnowRunner, and Ben has already said a lot of that in our SnowRunner review. But the contracts you take on in the game can get pretty long, and there’s only so much in-game music – and almost all of it is bluesy slide guitar stuff. There’s nothing wrong with that, but after a couple hours, you might need to mix things up a bit. The solution: tune in to SnowRunner Radio on Spotify.

An ‘unofficial SnowRunner soundtrack’ by used BundyRed, SnowRunner Radio manages to pull together some of the long-time staples of American classic rock radio, while throwing in just enough curveballs to keep you interested. There are some real classics in the mix, going back to For What It’s Worth by Buffalo Springfield, Spirit In The Sky by Norman Greenbaum, and If You Wanna Get To Heaven by the Ozark Mountain Daredevils.

A few cuts seem selected to play off SnowRunner’s main themes – specifically, driving huge trucks across untamed stretches of wilderness. Foghat’s Slow Ride is an obvious choice here, as is Heavy Fuel by Dire Straits. You’ve even got Dolly Parton’s 9 to 5 to cover you for this shift, which fits perfectly with SnowRunner’s working class setting.

It’s a pleasingly eclectic mix, ranging from easy listening through southern fried rock standards to some heavier fare in the form of AC/DC and Led Zeppelin.

You can find the playlist over on Spotify.

There’s plenty of music – the SnowRunner Radio playlist currently clocks in at 13 hours and eight minutes, so you’ll have music to cover at least the next few big contracts you take on. When the sun goes down, remember to crank that volume knob all the way up for AC/DC’s Night Prowler.