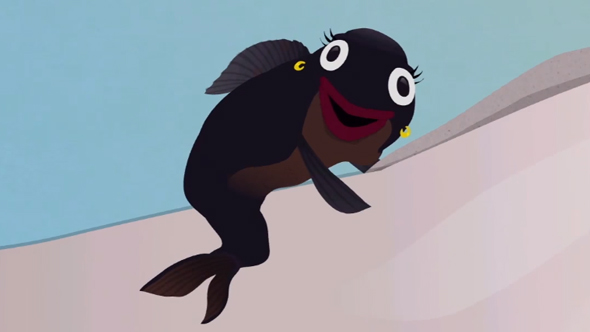 I debated the usage of the word “offensive” up top because it seems redundant when South Park’s in the mix, but one bit of the game’s latest trailer goes a bit beyond the show’s expected shock value. Or maybe it’s in line. I don’t know. I can’t even tell anymore.

You can add racial caricatures to the list of everything we know about the Fractured but Whole.

The new Game Is Gold trailer – oh, by the way, the Fractured but Whole went gold – parodies Only One, that game Kanye West was making about his mom flying to heaven on the back of a magical horse. Kanye here is portrayed by a gay fish, while his mom is, well…

Look, that’s just straight-up blackface, and it’s blackface used in the portrayal of a mammy character. I’m not saying that’s out of the norm for South Park, which did feature “Jew” as a playable class in the last game, but there is good reason for it to be turning heads here. Also, there’s a rainbow-farting unicorn in a Flappy Bird clone. True class.

It’s not the first time Fractured but Whole has made headlines for its racially-driven humor, either. Not long ago we found out that the game’s difficulty slider adjusts your skin color, making the game harder when you’re not white, mostly through decreased earnings.

Whatever your thoughts on South Park’s brand of humor, Fractured but Whole will be out October 17, and it’ll be uncensored worldwide.