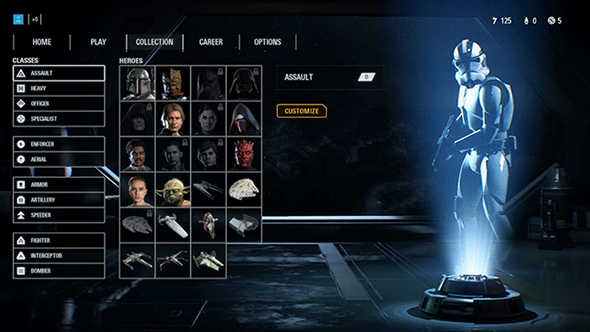 Star Wars Battlefront II had a bit of a rocky launch. Yes, that’s an understatement – the game’s loot box-driven progression system meant the internet swallowed it whole for a painful digestion over a thousand years. But, like an expanded universe Boba Fett, Battlefront has escaped the sarlaac pit of its own microtransactions and the first part of the change starts today.

Check out the best FPS games on PC.

Though loot boxes were the primary criticism of the original game, there was also the issue of how long it took to grind credits to unlock new heroes. The prices were reduced, but now EA and DICE have removed the system almost entirely, as all heroes and hero starfighters will be now be unlocked for everyone. This applies to every hero currently available, but future additions will need to be unlocked with credits.

You can get far more details on the new system in the official FAQ, but the other pertinent detail is that the cosmetics are not yet live. These items will form the new source of monetization for Battlefront II, but we won’t see exactly what they look like until the second part of the update launches in April.

There are also some more standard changes for the game as part of today’s update, including a new location with Bespin returning from the previous game. Cloud City will be available for Blast, Heroes vs. Villains, Arcade, and temporarily in Jetpack Cargo. Plenty of balance changes are also here, and you can see those in the full patch notes.