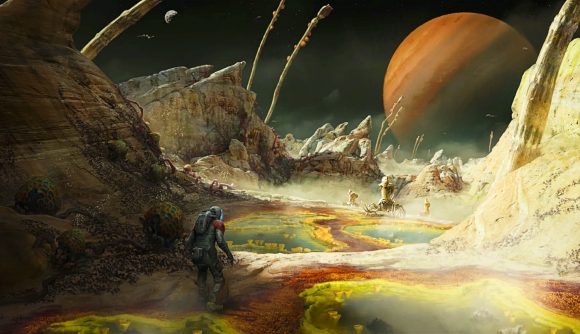 Bethesda is set to hold a Starfield beta test this summer, but it might have to leave some things on the cutting room floor for a chance to release the space RPG on time. According to an employee, the game has “an overabundance of content” that’s “probably too much” and likely needs trimming back if the developers want to avoid delaying until 2023.

In a now-deleted post on ResetEra that’s since been immortalised on Imgur, user Hevy008 not only reveals that Bethesda might be drowning in the amount of content planned for the upcoming PC game, but that manual space flight is also reportedly on the cards. They don’t paint a flattering picture of the mechanic, stating that “flying is terrible” at its current stage of development, but this would separate it from other sci-fi RPG games in recent years if it makes it into the final release.

It’s worth taking this information with a pinch of salt until Bethesda reveals more than just 8 seconds of new Starfield gameplay, but Hevy008 was a verified character artist on the forum before they deleted their account. Bloomberg’s Jason Schreier has also corroborates that they are who they say they are, although he can’t currently confirm the details they’ve shared.

Timelines are fickle things when games are still in development and things can change from day to day. It doesn’t help that Hevy008 also says “the engine is a piece of crap” from a developer usability standpoint, too, as this can cause stumbling blocks of its own. We should hopefully find out more concrete details following the summer beta.