State of Decay 2 is an ambitious zombie basher, but does it have the performance to match? Undead Labs have taken the well-received original and trebled it in size, with the graphical upgrade we would expect in 2015. That’s before we even get onto the ravenous shufflers that swarm on your motley crew of survivors at a moment’s notice.

The original was not without its bugs and glitches though, so how does State of Decay 2 stack up? Does it shuffle along like an undead husk or survive as it effortlessly slices up weak frame rates and puts performance issues to the kibosh. This is what we aim to find out in our State of Decay 2 performance review.

In the mood to batter some zeds? These are the best zombie games on PC.

Our performance reviews are written to offer you the broadest picture possible, focusing on hardware similar to what the majority of players have installed in their machines. We test the game on all graphical settings using an i5 powered rig with 8GB of RAM, and try to hit the golden 60fps mark. Even if your PC is not identical to our test setup, you should still be able to estimate the performance levels you can expect from your own machine. 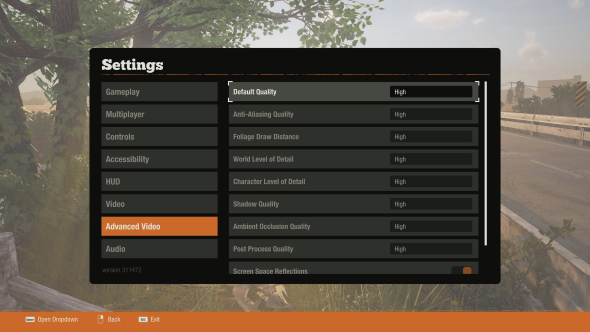 Under ‘General’ in the advanced menu you can select from low, medium, high, and ultra graphical presets. Below that you can dive into the finer details such as anti-aliasing and shadow quality, all of which can be changed to low, medium, high, or ultra. The only exception is ‘Screen Space Reflections’ which is an on/off toggle. It’s not exactly the most expansive of graphics options, but there’s enough here that you can adapt the game to your rig and get that sweet, sweet 60fps. 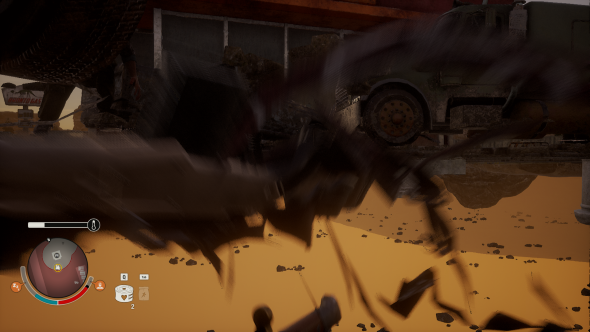 Interestingly, in terms of performance options, you can rewind two minutes in-game in case you get stuck on the environment or encounter a game-breaking bug with the ‘Stuck’ tool. If you find yourself in such a fix, press down and then left bumper if you’re using a pad and the U key and then Q if you’re a mouse and keyboard survivalist.

In our testing we somehow managed to find ourselves imprisoned beneath a car and were forced to use the ‘Stuck’ tool. While it isn’t the most elegant solution, and appears to be an admission of deep-rooted engine problems, it’s good to have it for peace of mind at least. Further issues such as invisible gates and shallow doorways we had to climb over are not game breaking, but did spoil the immersion somewhat. 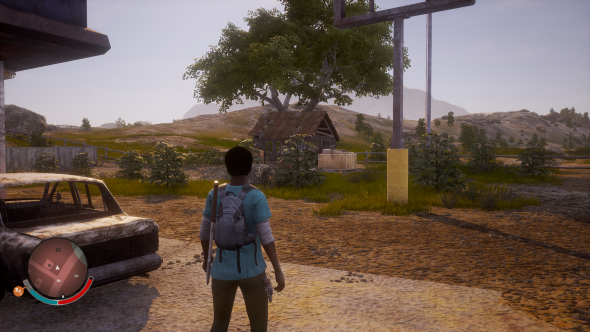 State of Decay 2 is by no means an ugly game, but even on ultra it certainly isn’t the prettiest. The area in this screenshot is sparse and rather brown, but the game includes prettier verdant valleys and suburban foothills.

The detail on the rusted car in the foreground is extensive, with many dings and scrapes on the paintwork visible. The grass looks lush and the leaves on the large tree in the middle ground plentiful. The arid rocky outcrop in the foreground, while mostly flat, has some height and shape to it. The shrubs dotted over the ridge in the background are not so detailed, but you will not be disappointed with State of Decay 2 on ultra overall.

The only issue is the frame rate: ultra appears to be capped at 30fps, even with VSync turned off. We reach 60fps in the menus on our GTX 1060 i5-powered rig, but in-game we’re stuck on 30. However, this is only the case in ‘Fullscreen’ display mode. When we switched to ‘Windowed’ mode the frame rate lock was lifted and we found a frame rate that hovered around 55fps. That is much better than the 30fps VSync cap but means that the game must be played in an ugly window. Regrettably, State of Decay 2 doesn’t feature a borderless window setting, meaning you cannot play at full-screen with an unlocked frame rate. 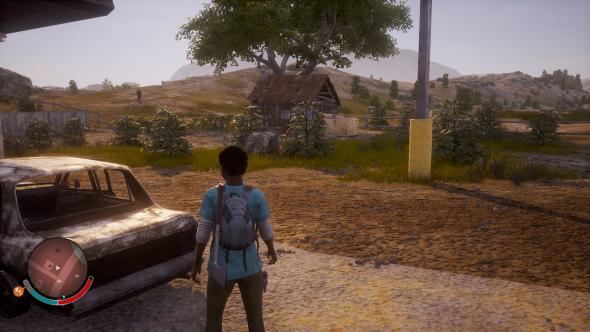 There is very little to distinguish high from ultra, but there are some very minor downgrades that can be spotted. The greenery of the bushes and the big tree are a shade less lush than was visible on ultra, and the rocky foreground lacks the complexity of the more demanding setting.

Other than that, there is very little to tell the two settings apart: the texture on the ruined car hold up well and the background holds more or less the same degree of prettiness. If your rig is struggling on ultra, moving down to high will not be an unpleasant to the eye whatsoever.

The apparent frame rate cap continues to hinder on high settings, although the lock here is 60fps rather than ultra’s 30fps when playing in fullscreen mode. When using high settings and windowed mode, the frame rate cap issue is lifted and we managed to see a stable 70fps. This is probably the best setting for most players. 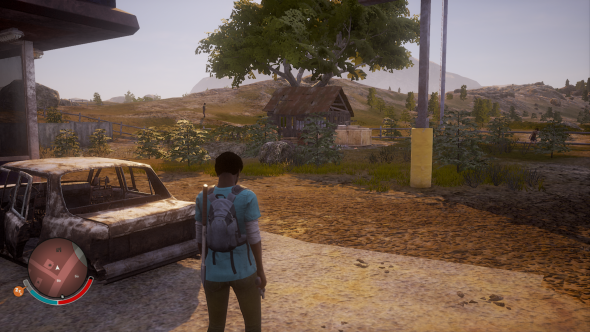 State of Decay 2’s medium settings are where the graphical quality starts to slide, and fast. The leaves on the big tree at the centre look flattened, and the textures and signs of decay on the car and the shed look smoothed over. The grass in the foreground is vanishing, too.

While the general detail of the stubs in the distance is reduced, not much has changed overall here. The game doesn’t look as ghastly as the undead on medium, but it is the more complex elements of the scene like the tree’s leaves and rocky outlines that are starting to take a hit.

In regards to performance, the 60fps lock that is implemented at high settings continues to hamper the game on medium. But, with the frame rate lock off in windowed mode, we could get rates of around 100fps. 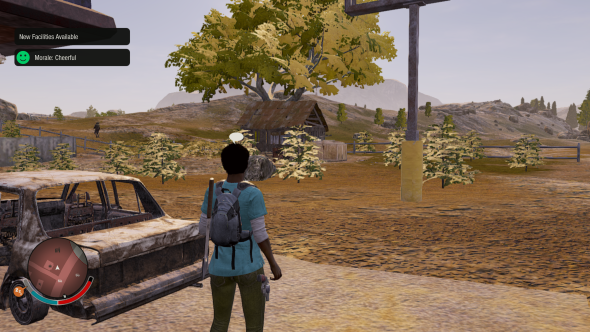 Remember when we said State of Decay 2 wasn’t an ugly game? Well, on low it is. Turning the graphics present down from medium sees the biggest decrease in quality, with the end result resembling a game from the previous generation. The patches of white rust on the car has spread and is much less detailed. The outline of rocks on the floor has disappeared, along with anything approaching grass.

The leaves on the big tree look flat and lifeless, as if they have been painted on with very few colours. The same goes for the bushes and shrubs that fill in the sparse environs. The outlines of objects in the background looks square and pretty much nothing in terms of shadows have made the cut. If your rig can cut it, make sure you don’t have to drop the game to low. On our 1060, we saw very high rates of about 150 fps, but that didn’t exactly make the game bearable to look at on low. 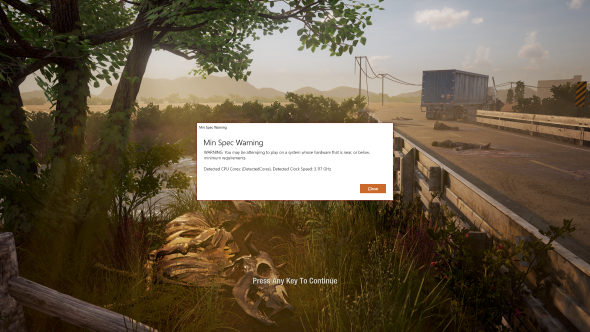 Even though most of our time with State of Decay 2 was smooth, there were hiccups. Frame rate dips were occasional but annoying, and the game chugged and slowed down, especially during combat with a heavy number of zombies. That said, we mostly experienced 60fps on our i5 rig with a GTX 1060 and 8BG of RAM on high settings. In fullscreen mode we were playing at a little below 60fps, but we would recommend either playing on ultra or o switching to windowed mode meant we saw around 70fps. As such, we recommend high settings in windowed mode for the best performance on a similar kind of PC. We’re not happy that we’ve been forced to use windowed mode to achieve this, though.

Also, we were warned that our clock speed was approaching State of Decay 2’s minimum requirements, despite our processor being a mid-range model a full two generations ahead of the actual minimum listed on Undead Labs’ official website – that’s an i5 2500 2.7GHz. 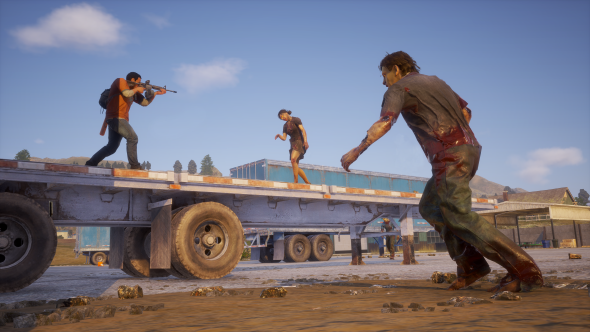 One of the two main features State of Decay fans implored Undead Labs to add – as well as a larger map – is multiplayer. State of Decay 2 offers co-op sessions of up to four players and allows you to offer assistance to other real life players and summon others in, Dark Souls-style.

Unfortunately, State of Decay 2’s multiplayer is a bit of a mess at launch. We didn’t need to wait long after our offer of help to be accepted by another survivor, but we experienced a plethora of performance problems once we joined. Sessions would regularly bug out and we suffered frequent crashes to desktop. The idea behind adding multiplayer for this sequel holds promise but, as things stand, Undead Labs haven’t delivered.

State of Decay 2, performs smoothly for the most part, but it is does suffer from serious problems that hold the game back. The potential of multiplayer fails to materialise due to performance issues. Glitches and bugs have burrowed their way in like maggots in rotting flesh, but at least you have the Stuck tool to rescue things if everything goes wrong. Unfortunately, in case your management skills aren’t up to par, that doesn’t count if you’re base has just been overrun by the undead.

The fact that the frame rate cap can only be turned off in windowed mode is disappointing Our mid-range rig certainly coped capably on higher settings and, with the cap out of the way we experienced a stable fps of just below 60 on ultra, and comfortably above that the lower the settings we selected. That means, when a stream of ravenous zeds swarm you, the frame rate shouldn’t drop to a disappointing low.

Chances are you will encounter technical issues during your time with State of Decay 2, but they are not always enough to ruin the experience. Bugs and glitches are common, and there are frustrating barriers that get in the way of an enjoyable multiplayer session. Frame rates might be solid but the lock means that we can only enjoy the smoothest of gameplay in windowed mode. With State of Decay 2, prepare to endure more than just the zombie apocalypse.

Can you run it? Check your PC against the State of Decay 2 system requirements 2021 on PCGameBenchmark.