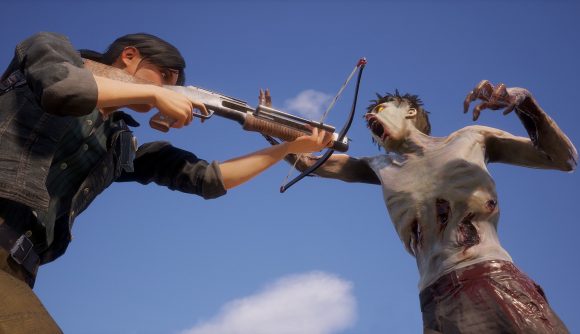 State of Decay 2 hasn’t been in the headlines lately, but it’s been steadily gaining players – it’s up to four million now, by Undead Labs’ own count. To celebrate, the studio has launched a new free DLC to the zombie survival game, and it’s making some interesting changes to the game.

Right up front, you’re getting a new weapon type: the crossbow. Undead Labs says there are eight varieties of these in the game now, but they all share one vital trait – silence. No longer do you have to roust the whole neighborhood to take out a screamer with a headshot.

Another handy feature of crossbows is that bolts can be recovered after use (which is why the crossbow is Daryl Dixon’s weapon of choice in The Walking Dead). The crossbows in State of Decay 2 also don’t jam or break, and they give you a better chance of extracting a plague sample from an infested zombie.

The Zedhunter update also adds new melee and close-combat weapons, including swords, so if you’re more a Michonne than a Daryl, this DLC has you covered too.

But what may be more potentially interesting for State of Decay 2 players is the changes to the ability system. Now you’re able to completely reset any survivor’s skill specializations, and change out core skill specializations by reading training manuals. There’s a downside to this – the new skill will develop more slowly than the original did, but this certainly is a way around situations where your outpost might face ruin due to the lack of anyone with a specific skill.

That’s a very nice quality of life improvement in itself, but there’s more: Undead Labs has added six “quirk” skills, each of which give a certain buff to your survivor group or community.

They’ve also added a whole new kind of item called ‘plague consumables.’ These give your survivors superhuman abilities like stealth or night vision, but they’re poison to humans and the cost for using them is taking on infection.

Zedhunter is available now, and Undead Labs says the new content will work with existing saves.