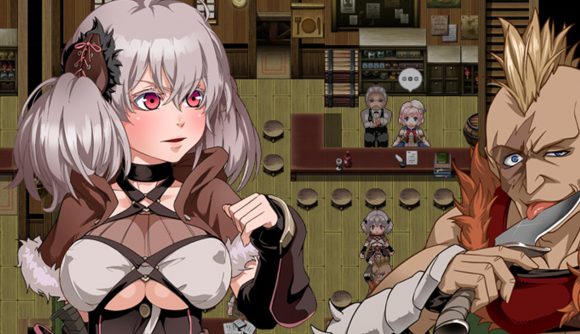 Last month, a game called Niplheim’s Hunter – Branded Azel was among the titles caught in limbo when Valve put an end to adult games featuring underage characters. Steam representatives never made clear why Niplheim’s Hunter was among the games affected during that time, and publisher HappyHand disputed that the title featured any characters below a socially acceptable age of consent.

In a new announcement, the publisher writes that “Steam contacted me and said there has been a misunderstanding on their part and there’s no problem with shipping Niplheim’s Hunter on Steam!” Valve hasn’t yet explained exactly why the game was held up, but the team behind the game is looking for details. In the meantime, Niplheim’s Hunter will be available via Steam on January 7.

The base game doesn’t feature any notable content – only anime girls with improbable proportions in even more improbable outfits – but a free mature content patch will launch alongside it with some notable additions. I don’t want to lose any of the nuance here, so I’ll just offer some quotes direct from the Steam page. (That’s only viewable if your mature content filters allow for it.)

“Azel can utilize the magic of the Lust Brand on her abdomen and use special skills. Using skills raises your EP and when it hits 100, the Lust Brand goes wild and Azel goes in heat. Monsters affected by the Lust Brand will fuck Azel in a variety of scenes.” Also, “Lust Brand counts and records Azel’s orgasms, sensitivities and the amount of semen she has milked and if you meet the requirements, you can learn helpful passive skills.”

Those are just the gameplay details – there are plenty of the sort of animated sex scenes and explicit art that you’d expect from a game of this type. The publisher says it’s fully uncensored with the patch installed. “Nothing has been removed and the game is the same build every other store uses after you install the free DLC.”

Related: Check out the best sex games on PC

Last year, Valve announced that everything which isn’t “illegal or straight up trolling” would be allowed on Steam, though some explicit games had to wait for adults-only content filters to be put in place. If there was any doubt about how explicit Valve would let Steam games get, Niplheim’s Hunter seems to make things abundantly clear: anything, up to and including explicit fetish material is fair game as long as it doesn’t involve kids. It looks like Steam’s rules are about the same as any major porn site – you’ll just have to click an extra button to see the raunchy stuff.