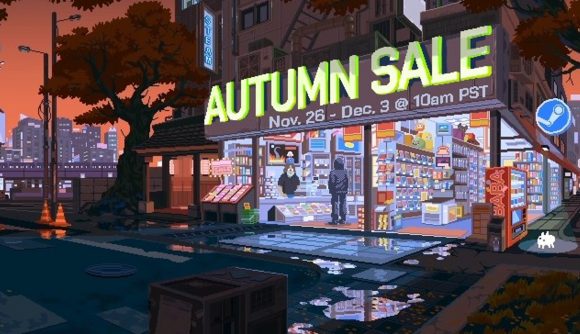 The Steam autumn sale is in full swing, delivering bargains for the next week. Last month, the dates for the next three Steam sales were leaked, then, today, SteamDB tweeted out a five hour warning. Better get those pennies and wishlists out.

Beginning today, the Steam sale will last until December 3, so, that means you’ve got seven days to grab yourself some discounts, and grab that special something on your wishlist for a lower price.

Some obvious highlights from the off are the recently released Gears 5, currently down 50%, Code Vein, down 30%, and a lovely 75% off Cities: Skylines. A few other worthwhile investments are The Crew 2, now also reduced by 75%, The Surge 2 with 40% off, and the excellent Dead Cells, worthwhile at any price but especially when it’s discounted by 30%. Being on of the four major annual Steam sales, here’s a wide selection of games store-wide, from sports to action-adventures, indies to the biggest triple-A releases.

Nominations are also now open for the Steam Awards, and will remain so for as long as the sale runs. The full categories are as follows:

Most of these are self-explanatory, but the Labor of Love is interesting. Basically, it’s an award for a team that stuck with a game that maybe didn’t have the greatest launch but has since become better, thanks to the tireless work of its devs. As more online-only games come out, this is becoming an increasingly relevant area of praise.

Valve have been busy the last while. The studio brought Half-Life back in a shock announcement, with VR adventure Half-Life: Alyx coming in March 2020. The guts of 1000 games were deleted off Steam this week, due to abuses of Steamworks.

If you’re really not sure what to buy in the sale, you might find our list of the best upcoming PC games handy. We also have lists of the best zombie games, best action-adventure games, and best new games of 2019, if you’re looking for more specific suggestions.