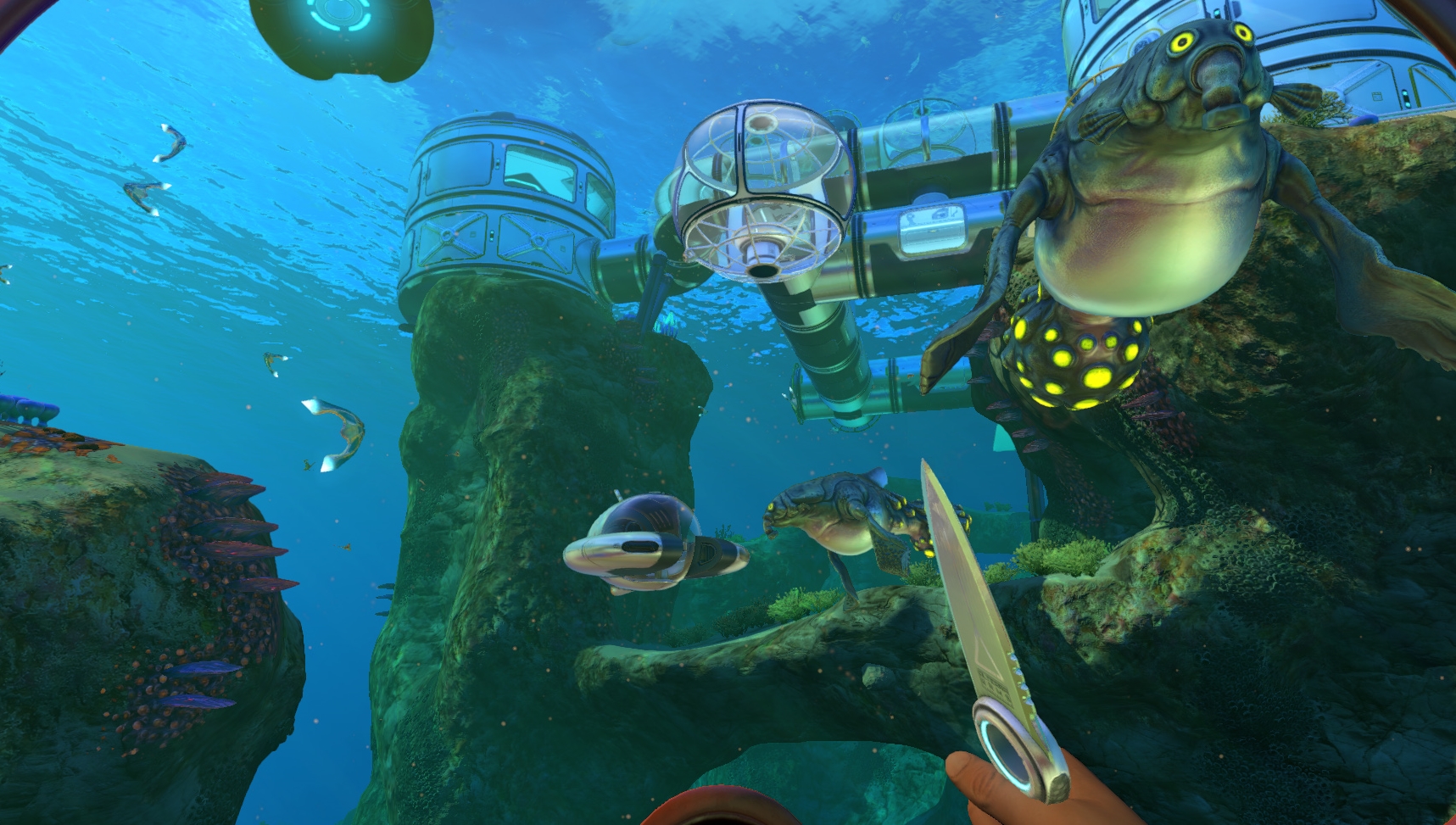 Steam Early Access has changed the way games are launched: gone are the years of waiting for a game, only seeing gameplay snippets in a string of trailers. With Early Access you can sometimes be playing a game as soon as it is announced. It has brought a new thrill, the thrill of a journey and a collaboration between community and developer.

Subnautica is perhaps one of the best examples of this new way of developing games. It is an underwater survival game, where you play as an unfortunate soul who has crash landed on an lonely sci-fi planet. With few prompts, it is up to you to decide how you will eat, drink, and escape – all while carefully managing your oxygen supply. It launches from Early Access today and, in the words of design director Charlie Cleveland, “there’s not much to ship.” 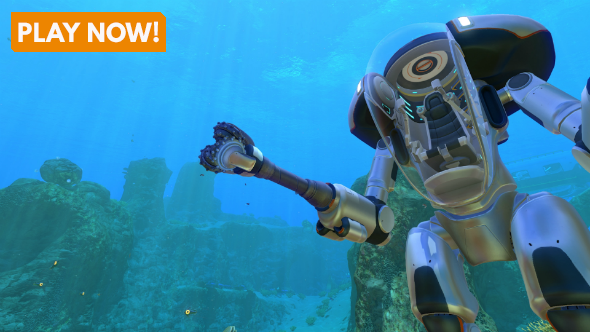 Where PUBG Corp might have refreshed the UI and added a new map to battle royale sensation PlayerUnknown’s Battlegrounds to herald the game’s launch, Subnautica’s three years in Early Access appears to have been a period of continuous launch days.

“We actually patch twice a day,” Cleveland says, “and automatically the game just builds. It goes to an experimental branch and then we do the non-experimental patches every month. The good thing about open development is we ship everything as we build it, but that means we can’t have an exciting launch day.”

It was not really an option for independent developer Unknown Worlds to create Subnautica in this way. “We had no choice: we spent all our money getting into Early Access. But it is in our company DNA,” Cleveland says.

Community collaboration is an integral part of the team’s philosophy, starting with Cleveland’s break into games development: working on Half-Life mod Natural Selection.

“Subnautica would have been half the game it is today if we had kept it internal and released it at the end,” Cleveland says. “We want to make games the best way we can and the only way we know to do that for the last 15 years is by having the voice of the customer built into our development.”

Subnautica is the first game I have encountered that is made through such open development. Researching the game before my interview, I was astonished to find Unknown Worlds’s Trello board – I could see itemised lists of everything each member of the team was working on, their goals, their progress, and no shortage of spoilers. The only things not made public, Cleveland tells me, are the team’s salaries, access to their HipChat channel, and their email. In future, even those might not be off the table.

“For Natural Selection our team were more focused in the office, so our process was less open because we could just have conversation around the office,” Cleveland says. “Then, with Subnautica, as the team completely moved off site, it was a no-brainer to make everything available on Trello.” 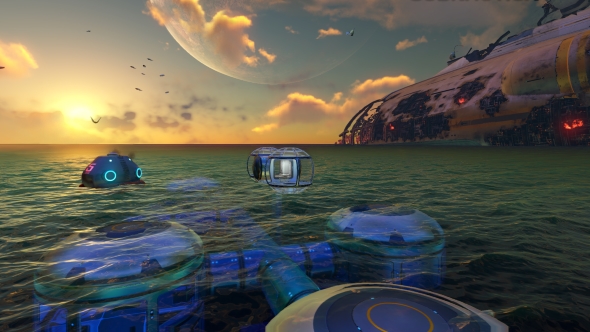 Not everyone was on board with this openness, at first. Cleveland thinks “the team has warmed up to it over time. Other people on the team feel, if they’re showing their work before it’s ready, and they know it’s crappy, they feel embarrassed. Especially artists who want a little more time.”

Surely, though, there is a constant pressure in being under surveillance for years on end? “I think it’s the opposite, the more public you are, the less you have to remember what not to tell people,” Clevelands laughs. “We’ve lived and died by Early Access revenue, our reputation, our rating on Steam, and word of mouth. To do well in all those areas you need to make a great game and, on top of that, you need to show people that if they’re going to give you their 25 bucks that you’re going to take it seriously and not just go to Mexico, slap a 1 on it and call it done.”

As a result of open development, Unknown Worlds have cultivated a healthy base of highly invested players. Taming and tapping into the steady stream of suggestions and issues – that can be reported in-game – and understanding them in a workable way was a challenge, but, often, dedicated Subnautica fans become staff.

“We always get super fans that join us and start making levels, sounds or fix bugs, it happens all the time. The whole team is from the community,” Cleveland says proudly. Subnautica might blur the boundary between development and launch, but its team muddies the line between developer and community.

Out of my depth 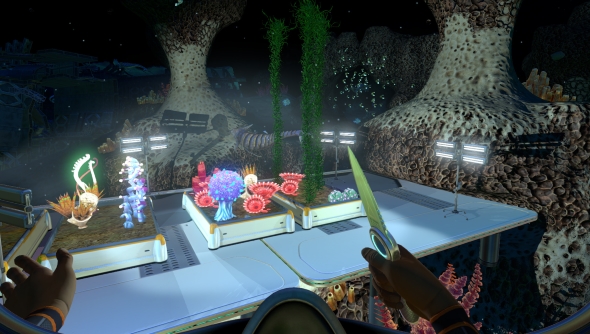 Subnautica is not a game that holds you by the hand. After starting a new game, you emerge from a crashed escape pod in a seemingly endless ocean. Then, I raced for the only landmark on the horizon – a crashed ship, edged in the water like a downed star destroyer. As I swam, a small red fish attacked me, emitting a high-pitched squeal before exploding, taking a chunk of my health with it. What finished me off was that I forgot to keep an eye on my oxygen levels. On my second go I at least reached the Aurora… before succumbing to radiation. In many ways, I am out of my depth.

“You’ll work it out in the end,” Cleveland smiles as I sheepishly recount this. “We don’t tell you anything. You can see there are no quests like you would see in most games, no progress indicator of where you are in the story. That’s something I was really firm about with the team.”

Over the next few hours I spent with Subnautica, I spent more time looking and listening. Plucking flora and chasing down swimming fauna, I plunged deeper into this watery abyss, the hue of my surroundings becoming a richer blue.

I return the spoils of my tentative travels to my escape pod, which holds the Fabricator. This handy bit of machinery allows me to craft new recipes for food, drink, and machines. Emboldened, I resolved to explore further, and deeper.

Adventure for its own sake 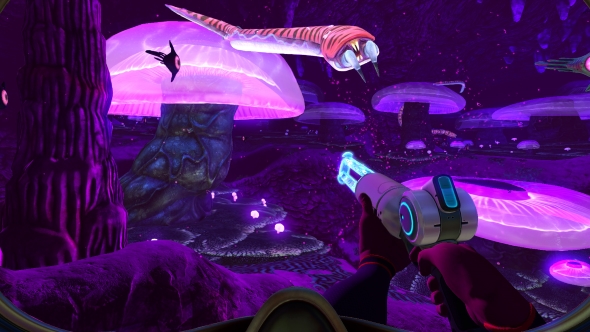 Without missions, objectives, and tangible rewards, I kept playing Subnautica for the thrill of adventure, that intoxicating pull of discovery that drags me into my favourite sci-fi and fantasy worlds.

“What I really like about a game like this is the freedom to explore, to do what you want,” Cleveland says, explaining why the team do not signpost objectives. “With intrinsic rewards, people are instead encouraged to just do the activities for their own merit, less people would be motivated to do it. But, if they did get over that learning period they would get to the point where they internalised that activity as pleasurable on its own and they would continue.”

The idea to remove extrinsic rewards came from an article written by Jamie Cheng, founder of Klei Entertainment, makers of Don’t Starve. 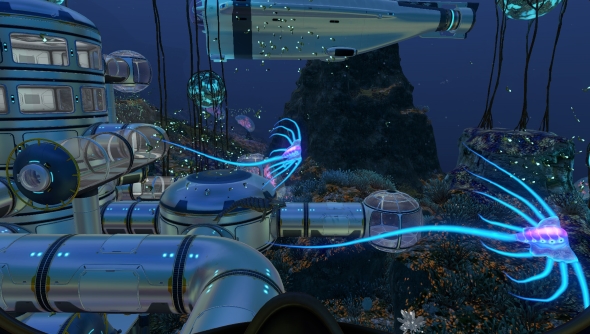 “They wanted this open sandbox experience where people did crazy stuff, experimented, and used their creativity. So, they ended up doing the really counterintuitive thing and removed all help tips and quests. When I read that, I knew that’s just what we needed to do.”

In many ways, a soft launch from Early Access is most fitting for Subnautica. In its three years in early access, Unknown Worlds’s development process – inextricably linked to its DNA – the game has been a team effort between developer and community. Each decision could be scrutinised and fan feedback has shaped the game almost organically. Reflecting the circumstances in which it was made, in Subnautica, it is about the journey, not the destination.

Let us know what you make of the game in the comments below.