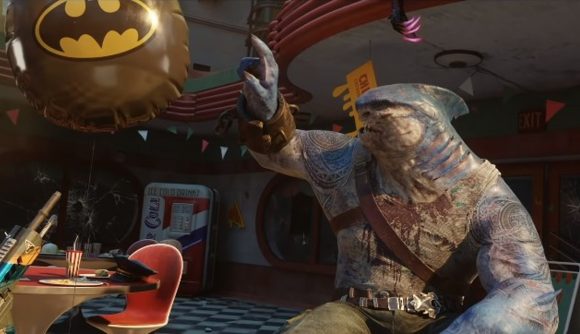 We already knew Rocksteady’s next foray into the DC universe would be Suicide Squad: Kill the Justice League, and now we have the first trailer for the action-adventure game.

Revealed during DC’s Fandome livestream, the cinematic teaser introduces us to four of the members of the titular anti-hero team, and who, exactly, they’re up against. In the footage, Harley Quinn, Deadshot, Captain Boomerang, and none other than King Shark are called in by Amanda Waller to help stop what looks like an alien invasion. While blasting away small-fry enemies, they land on a building and are confronted by Superman, who kills a human being right in front of them.

We cut to the logo right as the four realise they’re battling evil Superman. Suicide Squad: Kill the Justice League has been designed as a 1-4 player co-op multiplayer game, and although there’s no gameplay, we do see some hints as to what the thing will look like in motion. King Shark is the powerhouse, Deadshot the sniper and long-range guy, Harley the acrobatic leader, and Captain Boomerang throws a mean boomerang (and has a teleportation ability).

A Suicide Squad game was hinted back at the end of 2015’s Batman: Arkham Knight, Rocksteady’s last major jaunt into the DC universe. This is a continuation of the Arkham trilogy’s timeline, and takes place in an open-world Metropolis. What else is going on with other heroes and villains remains to be seen.

You can watch the trailer below:

This wasn’t the only DC game that got a showing at Fandome – we got a cinematic trailer and gameplay of WB Games Montreal’s Gotham Knights, too. Suicide Squad: Kill the Justice League is due 2022.