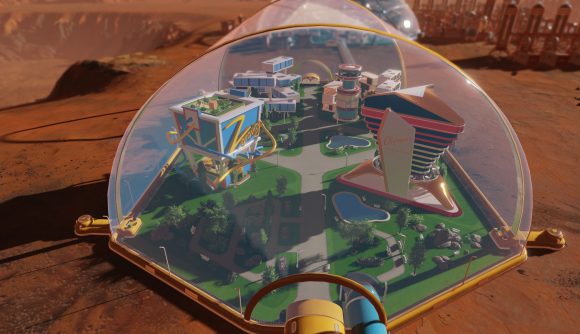 After two years, development has resumed on Surviving Mars, with a different studio at the helm, and two updates are being released to celebrate. One covers tourism for the red planet, and the other brings eight new buildings.

Announced by Paradox Interactive during the most recent PAradox Insider, Abstraction is now the developer working on the strategy game. Not resting on their laurels, players will have access to a free tourism update, and the in-dome buildings pack, on March 15, to commemorate this reveal. The tourism update changes how tourist ratings from affect your score, introduces safaris, and lets you build hotels and amusement parks to keep your holidayers happy.

A good “Holiday Experience” rating can get you rewards and funds, for which you can increase your chances by making a Low-G Amusement Park, and completing the Smart Homes research to unlock hotels. Snazzy. You can mark out a lovely tour of the cosmic scenery by doing the Rover Printing research, and building your own radio-controller safari. The course is then marked out by waypoints, and away everyone goes. If the research is taking too long, you will have the option of renting a rover from earth – all depends on your patience, really.

The In-Dome buildings pack is collaboration with Surviving Mars modder Silva, and the whole thing is catered to expanding community and housing. The eight buildings themselves range from smart apartments to hospitals to a TV studio workshop, and the pack will run you $4.99 / €4.99 / £3.99.

Paradox and Abstraction have a full Surviving Mars expansion in the works for later in 2021. If you’d like to try it, Surviving Mars is currently the free game on the Epic Games store.