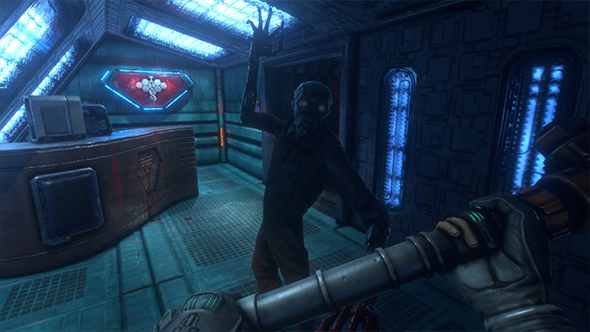 Update, March 23: The System Shock remake is still happening, according to Nightdive Studios.

Last month, Nightdive Studios announced that development of their System Shock remake was going on hiatus, after the scope of the project ballooned far beyond the original pitch or what the team were capable of. That doesn’t mean that the game won’t come out, of course, just that it will be scaling back on its more ambitious points as the developers reassess their direction.

You may want to check out some of the other best old games on PC while you wait.

“Our intention is to ship exactly the game that was promised,” Nightdive CEO Stephen Kick tells PC Gamer, “with as much of the features that were promised as we can, in a timeframe that will get it out as fast as we can. Our expectation is probably Q1 of 2020.”

Kick says the decision to rethink was based in large part on backer feedback that “we weren’t going in the right direction with the game, what we promised to them.” The remake went from a largely faithful recreation of the original in a new engine to a redesigned reboot full of new features.

Business development director Larry Kuperman describes what happened as “feature creep,” essentially. “All of those things like ‘you know what would really be cool, how we might reinterpret this.’ Various people wanted to put their imprint on it. As this process evolved over a period of time, it grew in complexity, and it veered away from this original representation. That doesn’t mean that interpretation would’ve been bad, but it wouldn’t have been true to the System Shock vision.”

The remake, in slightly reduced form, will still be built utilizing Unreal Engine, though it will be closer in form to the original Unity demo. Kuperman also says they’ve had more interest from publishers since reducing the scope, so hopefully they’ll have the financial support necessary to ensure the project comes to completion.

Original story, February 16: Nearly two years ago, Nightdive Studios raised over $1.3 million on Kickstarter to fund a remaster of the original System Shock. Thanks to the campaign’s success and publisher interest, the scope of the game expanded into a full remake – but now, it seems the project’s gotten far too big.

In a new Kickstarter backer update, Nightdive CEO Stephen Kick says development is going on “hiatus while we reassess our path so that we can return to our vision.”

Kick says “We are taking a break, but NOT ending the project. Please accept my personal assurance that we will be back and stronger than ever. System Shock is going to be completed and all of our promises fulfilled.”

Last year, Nightdive revealed that they would apply “modern level design principles” to the remake at the same time as they announced an engine switch from Unity to Unreal. Before the Kickstarter, they had already released System Shock: Enhanced Edition, a version of the original lightly updated to run on modern PCs. System Shock 3 is still in development at Otherside Entertainment.

“As the CEO and founder of Nightdive Studios, a company that was built on the restoration of the System Shock franchise,” Kick says, “I let things get out of control. I can tell you that I did it for all the right reasons, that I was totally committed to making a great game, but it has become clear to me that we took the wrong path, that we turned our backs on the very people who made this possible, our Kickstarter backers.”