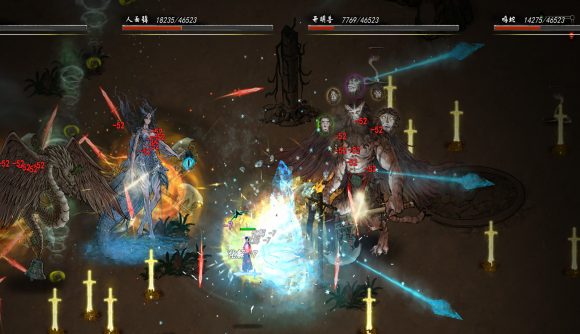 Steam’s latest hit is a Chinese RPG game that’s launched to an immediately receptive audience. Tale of Immortal, out less than a week, has already gathered over 124,000 concurrent players at its peak.

Developed and published by Lightning Games, Tale of Immortal is an open-world game based around Chinese mythology. Starting as a mortal warrior, you gradually ascend towards becoming a deity of some form or other, making particular choices depending on how you want to resolve things and build your character. It’s in Early Access right now, offering six chapters, and the full version is due in about a year, according to the Steam page.

Where Tale of Immortal stands out, however, is that it’s currently only available on Valve’s store in Simplified Chinese, meaning many of these players are from China itself. This is the second Chinese-language game to make a splash on Steam this month, following strategy game House of the Three Kingdoms 8, which topped at around 25,000 players a couple of weeks ago. But what separates the two is Tale of Immortal is available everywhere, whereas Three Kingdoms 8 is China-only. Industry analyst Daniel Ahmad points out that China now accounts for a quarter of Steam’s users, and the success of both games goes against the general buying habits for Chinese players.

Tale of Immortal and House of the Three Kingdoms 8 join Bloons TD 6 as curve-ball Steam hits for 2021. Your guess is as good as ours as to what’s next. Here’s all the best upcoming games to fuel your speculation.