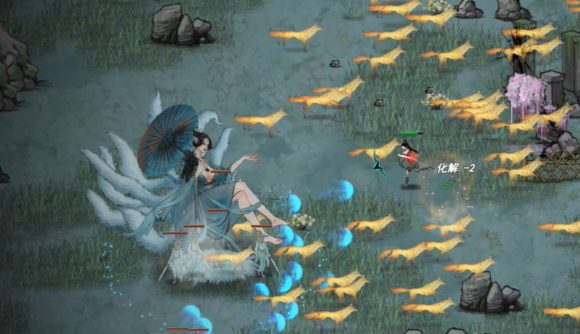 As of the time of writing, Steam Charts’ data has the new PC game at number five in the platform’s current most-played list, with a live player count of over 119.5k – which means, as of this story, it’s seeing more players than some of the other biggest multiplayer games on Steam.

Naturally, this could likely shift over the course of the day, as Tale of Immortal is currently only available to play in Chinese language, so we can assume many of those figures are coming from Chinese players as they play during the daytime, while Apex Legends, GTA V (which includes Online), and Rust will likely see an uptick in current players as the USA begins to wake up later on.

Still, the raw numbers for Ghost Valley Studio’s new title are really something. Since its launch a few weeks ago, it’s seen some big concurrent player counts – according to Steam Charts, it’s seen a peak of 183,985 concurrent players in the last couple of weeks, and daily peaks since have sat somewhere between that and around 135k. Numbers around those marks still put it comfortably in Steam’s top ten based on regular peak player counts.

The Tale of Immortal devs recently said they “will work hard” to create an English translation, so perhaps we could see those numbers continue to rise in the future if English-speaking players get the chance to try the game. Tale of Immortal draws heavily from Chinese mythology and, as explained on its Steam page, “combines the immortal cultivation and the unique cultural background of The Classics of Mountain and Sea. Players will experience the journey from a mortal to a strong, god-like being”. Whether the game will continue to rake in these kinds of numbers, though, we’ll just have to wait and see.

If you’re keen to check out another of Steam’s latest big hits, you might want to take a look at Valheim – it’s also soaring up Steam’s most-played, and we have some handy best Valheim weapons for combat and Valheim console commands and cheats guides to help you if you’re diving in.