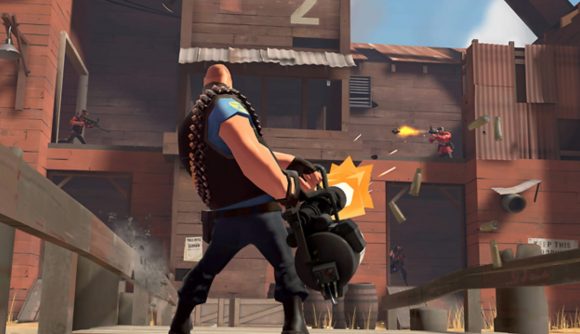 Team Fortress 2 has been having a racist bot problem lately. Spammers create new accounts and assign it a bot, which then heads into Team Fortress 2 games armed with aimhacks and trigger hacks, head-shotting players and filling the chat with racist invective. The problem reached the point that Valve has finally acted to put a stop to the abuse – but there’s still work to be done.

Last week, Kotaku looked into the issue of so-called Myg0t bots invading Team Fortress 2, detailing players’ frustrations with Valve’s inaction and the efforts players themselves have made to try to fight back. Up until now, that had amounted mostly to vigilante groups of players wearing special gear to minimise the bots’ impact and report/kick them when they were identified. Now, Valve has released an update to Team Fortress 2 that will at least shut the bots up.

As Eurogamer reports, yesterday’s Team Fortress 2 patch notes includes a line about restricting “certain new accounts” from using chat in official matchmaking modes, but that “work is ongoing to mitigate the use of new and free accounts for abusive purposes.” In other words, the bots are still there – and presumably still cheating up a storm – but they won’t be blasting racist garbage into the chat window non-stop now.

The patch also allows players to enable or disable voice and text chat by selecting the appropriate boxes in the advanced options menu, and the report player dialog box has been updated so “players can make informed decisions about who they’re reporting.”

Team Fortress 2 doesn’t get updated much these days. Valve confirmed what many had already suspected late last year when it said that “hardly anyone” is working on Team Fortress 2 any more.

Still, this patch is something, and it sounds as though whatever remains of Team Fortress 2’s support team is still working on solving this problem.