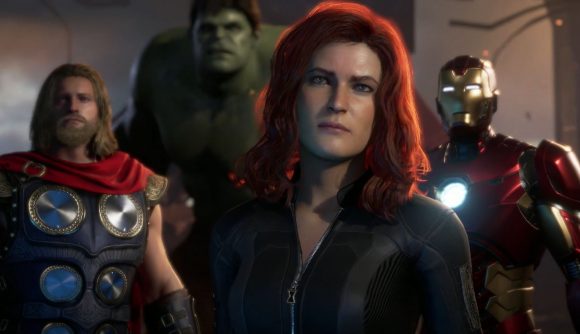 Marvel’s Avengers, the game previously known as The Avengers Project, is a collaborative effort worthy of Endgame – between Marvel, Square Enix, Deus Ex developer Eidos Montreal and Tomb Raider developer Crystal Dynamics. With those big studios behind it, not to mention the biggest license in the world right now, Avengers will undoubtedly be a huge game in 2019 – but it’s not already without its controversy.

Probably the biggest Hulk-sized issue fans have had – after the game’s reveal at E3 last month, and the extended footage shown off at Square Enix’s conference – was that a few of the character models looked a little… off. While no one expected the Avengers to look like Robert Downey Jnr, Chris Hemsworth, Scarlet Johansson and the rest – they didn’t look unique, either, with one unkind fan comparing them to “stunt doubles”.

Out of all the Avengers on display, one hero in particular drew the ire of fans – Black Widow. Presumably because she’s one of the few characters who doesn’t wear a mask, have a beard, or turn huge and green to disguise it. However, just one month after the E3 demo, it looks like the developers have redesigned Black Widow – and she looks much better.

The new look for Natasha Romanova was spotted by the Avengers Twitter news feed – catchily called ‘Have We Heard Anything About Marvel’s Avengers?’ – in the recent Comic-Con gameplay demo. Despite Crystal Dynamics’ lead creative director Shaun Escayg saying that they currently have “no plans to change our character designs” – just one month later, they’ve done exactly that, and there’s a marked improvement.

Escayg also said, “the trailer is showing pre-alpha gameplay footage, which means the level of detail and overall polish of the character models will absolutely continue to improve as we get closer to launch.” As you can see from the comparison shots above, “closer to launch” is apparently “the next time we show the gameplay footage a month later”.

The gameplay footage in question – which was only shown behind closed doors at E3 and only at the panel yesterday at SDCC – will be released just after Gamescom next month, so there may yet be further improvements to the core Avengers cast. Marvel’s Avengers will drop May 15, 2020, by which point it’ll probably be a completely different game to the one shown off at E3.