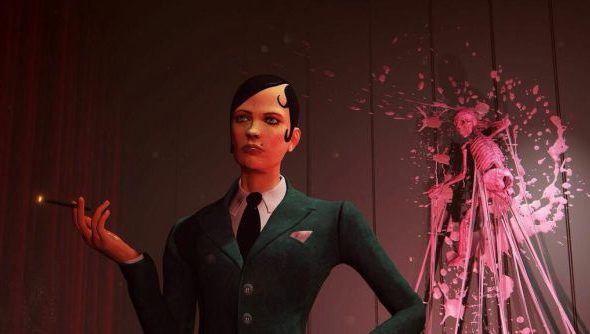 The Black Glove was a project started in the wake of the “winding down” at Irrational Games that left a large majority of its staff unemployed. A scrambling team took to Kickstarter with a vaudeville aesthetic and meditation on art not a million leagues from BioShock’s Fort Frolic – missing their target and vowing to pursue all options with publishers.

Alas, they never found a garment that fit – and with key staff now drifting to other, paying projects, the Black Glove team have hung up their paintbrushes.

After Kickstarter failed to provide for The Black Glove in October, its team put together a demo focused around exploring story-heavy environments via the titular glove, used to alter elements of an artist’s past.

The demo turned up at GDC and PAX East and was shown to publishers in private. But despite some interest, Joe Fielder and his colleagues at Day for Night didn’t find the “perfect glass slipper we were looking for” (c’mon Joe, the glove metaphor is right there).

“We’ve invested thousands of hours and considerable thought and emotion into the project, so it’s hard to step away, but it’s not forever,” blogged Fielder.

“Design legend Paul Neurath said to us recently, ‘In my experience, good ideas don’t have expiration dates’. They’re words we’ve really taken to heart, so we intend to return to The Black Glove later when we can do it right.”

Fielder has no doubt been talking to Neurath a lot lately; he’s wound up as design director on Underworld Ascendant at OtherSide Entertainment – where he’s joined by Black Glove concept artist Robb Waters.

In fact, all of the Black Glove’s developers are “working on exciting new games”: animator Pete Paquette is working on a narrative and puzzle game under the name Wolf Island Games, and writer Charles Soule has contributed to Human Head mobile horror game Lost Within.

“That’s just everything we can tell you about yet,” said Fielder. “Thanks again to everyone for your extraordinary support.”

Hum. For a little good news from former Irrational devs, have a look at survivalist raft adventure The Flame in the Flood. Did you back the Black Glove?