Update 13th Jan, 2016: The previously leaked trailer for The Division is now available from an official source.

Ubisoft, in all their wisdom, have decided to accept fate and release the official version of that trailer for The Division from yesterday onto the internet, so we can all look at it on YouTube instead of through dodgy third-party sources. It’s still unlisted, so they’re probably still planning to officially announce it along with some other information later on, but at least the mono-lingual among us can understand it now.

The Division has been incoming for quite some time, that’s why it’s on our list of upcoming PC games.

In it, the ‘Agent Journey’ is explained, from the initial founding of a dilapidated home base through recruiting civilians and helping them to make a home after the money-virus apocalypse. Also: there will be dogs. Hopefully, lots of dogs. If that doesn’t get you excited for a 2016 videogame, nothing will.

We still don’t know exactly how this meta-game and presumably story-focused part of The Division will work, or how it’s integrated into the online portion of the game. What does the focus on co-operation here mean for the PvP elements we’ve seen in previous trailers, and the betrayal that seems to be an expected part of the way people play? Is upgrading the base effectively upgrading your character, or are there seperate but linked progression tracks? Is this more like Eve with multiple bases that can be captured between players, or WoW where it’s just a part of the world where you have your own instance?

All this and more will presumably be revealed come the beta, which is still scheduled sometime between now and that fast-approaching March 8th release date. I’m quietly excited for it, not having got to play Destiny in its console-only state and seeing shades of that here, but am worried they’re pushing much-needed stress testing a little close to release. 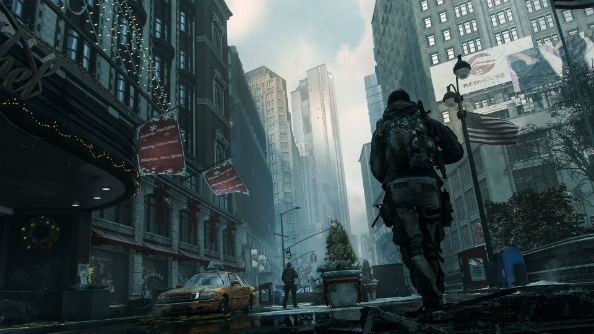 Original Story 12th Jan, 2016:Earlier today, a three minute trailer for Ubisoft’s upcoming open-world third-person shooter that’s been in development for forever and a day surfaced, before being pulled by the publisher.

If you missed it, fret not because some clever internet user managed to host it elsewhere prior to the ban.

Posted originally to YouTube by GameStop Italy, the video – which can now be found here – is packed with cutscenes, and a smattering of actual gameplay – not least some fairly hectic shootouts and what looks like real-time menu configuring and weapon customisation.

Locations on show include the streets of New York, the Manhattan Bridge, and a couple of areas within a CERA base, such as a mess hall and a gym.

Although still on course for a March 8 release, there’s still no word on the when The Division beta will start. Rumours circulating yesterday did however point to the end of this month – we’ve reached out to Ubisoft for word on that either way. In the meantime, there’s still time to grab a beta keyfor the game via this week’s Humble Bundle.

So, eh, how’s your Italian? If you fancy translating the action for us before the English interpretation drops, please do so in the comments below. Grazie!