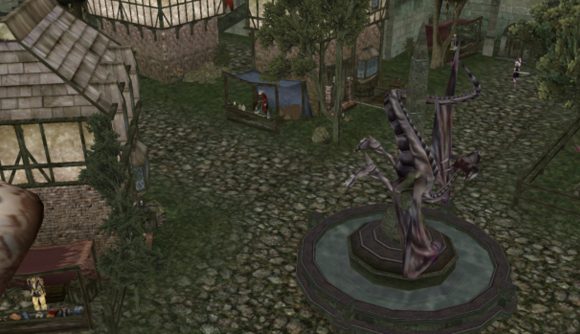 Morrowind Rebirth, a gigantic overhaul of the classic RPG game, is getting an update to celebrate ten years of development. New armour, weapons, and spells are added, and several locations have been given a lick of paint.

The mod turns ten on March 29, and just ahead of the big day, the team has released version 5.4, and listed everything it includes. Some 16 locations in the fantasy game, including Ebonheart, Maar Gan, Balmora, Gnaar Mok, Tel Aruhn, Dagon Fel, and Sadrith Mora have been reworked in one way or another. Some have just had the clutter changed, others have had their NPC scripts fixed to make interactions feel more natural, some have had their layout shifted slightly, and one gives a home to a homeless NPC.

Silver Saint is a new creature, and Cephalopod Gauntlets and the Silver Saint Shield are the new armour. Dozens of magic armour, weapons, and clothing have been added, and Voroyn’s Ring and Dread are two new unique items. Burning Touch, Freezing Touch, Poisonous Touch, and Shocking Touch are the four new spells, each with three degrees of use.

These are in addition to a laundry list of smaller changes you can find on ModDB. Since it started, Morrowind Rebirth has gradually improved and expanded on just about everything in Vvardenfell, making the old game easier to get into for newcomers, and providing something new for veterans. You can find an install guide in the description here.

Here’s a trailer from Morrowind Rebirth 5.0, a little under two years ago:

We spoke to the devs around that time, about spending almost a full decade remastering Morrowind. For more The Elder Scrolls modding, we have the best Skyrim mods. As always, mod with caution.