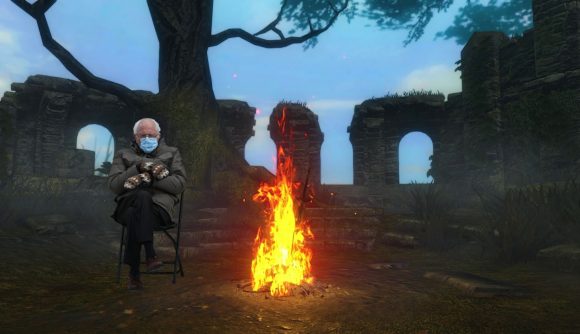 First, we had Bernie Sanders join the roster of Soulcalibur 6, now, he’s joined just about every other extremely popular game you care to mention. A YouTuber has compiled a video of the funniest and most cursed ways the US senator is now available in videogames.

Skyrim, Dark Souls, Resident Evil 7, Devil May Cry 5, and Fallout 4 are among the titles ToastedShoes has modded the Bernie Sanders chair meme into, using relatively simple skin mods from other creators. The first game is Star Wars Battlefront 2, modded by TigerVenom22, where Bernie becomes a floating Sith lord wielding Darth Maul’s double lightsaber. The next has a herd of Bernies in Fallout 4, courtesy of HcG x Grill, overrunning some poor vault-dweller, and a giant Bernie attacking a city like a kaiju.

After that, we have one of the highlights, Bernie Sanders taking on every role of the Baker family in Resident Evil 7, from MrMarco. Then, Skyrim but every NPC is Bernie, fulfilling someone’s absolute dream and another’s total nightmare, using modding work from HcG x Grill once again, and, of course, the dragon from the opening is Sanders too. Bernie takes over for the Asylum Demon in Dark Souls after, and a couple of other enemies besides, made by User619, who did the Soulcalibur 6 mod, and when he’s done there, he becomes the final boss in Devil May Cry 5, as put together by Apexprimebeast, before finishing with a gentle swim in Abzu.

Here’s the full video, for all your meme needs:

We’ve lists of the best RPG games, best horror games, and best FPS games, to give you more candidates for special appearances from Bernie.