There are plenty of ways to imagine Skyrim and The Witcher 3 colliding. Some of the best Skyrim mods and best Witcher 3 mods are those that bring elements of the two RPG games to each other’s worlds – especially the really fun stuff. Speaking of which, you can now take on Witcher 3-inspired monster hunting contracts in Skyrim: Special Edition thanks to a freshly ported mod.

LordMacdog’s ‘Monster Contracts’ SSE mod is “inspired by the Witcher 3”, the creator says, asking: “Have you ever wanted to be a monster hunter in Skyrim? Now you can! Join the Protectors, a guild of professional monster hunters, and take on contracts!” Sweet! It’s worth noting though, as the modder cautions, “these contracts are not as straight forward as they seem”. Gulp.

Each contract not only includes a big ol’ carrot in the form of a shiny reward, which – as Geralt of Rivia himself will know – awaits an eager witcher only after a monster’s been successfully dispatched. Each contract has its own accompanying “unique story”, too.

The mod has been available for the base game version of Skyrim for a few years, but it’s now come to SSE, which will surely mean a whole bunch more Elder Scrolls fans can give it a go for the first time. Oh, and there’s a handful of updates, to boot. User Kaiserwill, who’s provided the SSE port, says they’ve made some “minor edits” to some of the mod’s NPCs to enhance their lore friendliness. “Not just anyone gets to run around in Daedric armour, you know,” they say. Fair enough. 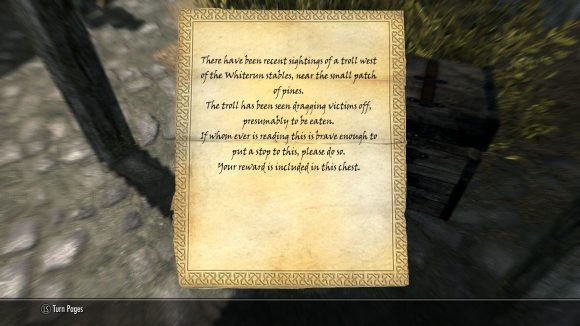 To start your quest as a witcher in Skyrim, all you have to do is head to the city of Solitude, chat to the guard that stops you for a chinwag, and proceed from there. Aspiring Dragonborn witchers can enjoy a sigh of relief knowing they’ll get to skip the whole trial of the grasses thing. Phew.

You can grab the Monster Contracts mod from Nexus Mods here if you’re keen to become a Witcher in Skyrim. Also, be sure to take a look at our rundown of the best open-world games on PC – because if you’re a Skyrim and Witcher fan, you’ll probably enjoy some of the others on that list.