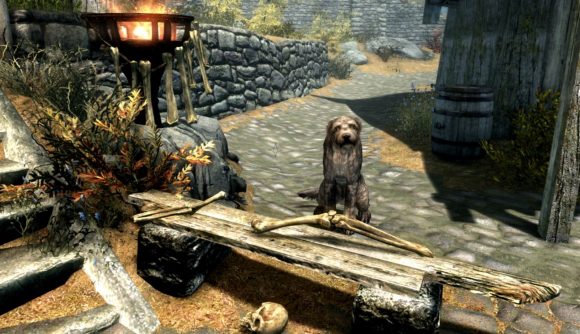 Skyrim’s trading capital, Whiterun, is home to many merchants offering the best wares the land of the Nords has to offer – potions, foodstuffs, gear, and Eorlund Gray-Mane’s awesome Skyforge steel creations, of course. One thing you may (or may not) have thought missing, however, is a vendor of the stuff that’s attached to the meat you’ve been perusing for your stew. Well, one modder has decided to change that – with a cute little dog that will sell you bones.

Creator Lordkirby103’s The Bone Merchant mod adds an adorable doggo called Chicken Leg to Whiterun’s marketplace, who is a specialist in catering to your cartilaginous needs. He has the same appearance as some of Skyrim’s other well-known canines, Meeko, Vigilance, and Barbas, with scruffy brown fur and that winningly cute expression.

In the pictures accompanying the mod, you can see that Chicken Leg offers an impressive range of bones for you to purchase. Somewhat disconcertingly, though, they don’t seem to be the kind you might see a dog usually gnawing on or used for making soup – they’re human. Even his little stall is adorned with human leg bones and a skull. Gulp.

Oh, and he sells a new ‘Escape Potion’ which the modder says lets “you escape from dangerous situations (best used outdoors).” If you hear that Chicken Leg’s low on stock and he starts approaching, maybe you could use the potion then.

If you’re tempted to add the entrepreneurial pup to your game, just get a look at his little face on the mod page – he’s pretty convincing. You can download Chicken Leg the bone merchant for your Skyrim game from Nexus mods. You’ll never be short of bones – or escape potions – again.