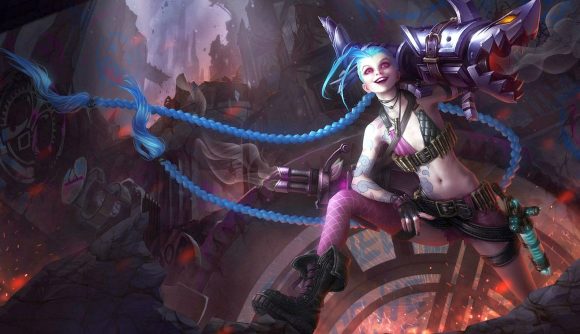 League of Legends’ many Champions have plenty to say, both in the heat of battle and the build-up to it. Now, they’re able to lend their voices – or, should that be dragon shouts – to the role of the Dovahkiin, thanks to a series of new Skyrim mods that bring some of the best League of Legends Champions’ VOs to the 2011 RPG game’s world.

As reflected on the mod page for the latest VO addition – Jinx’s – the mods build on the existing Skyrim PC head tracking and voice type mod, which enables things like changing voice types and button press-activated character speech. With this as a foundation, the LoL Champs’ voice lines from the MOBA game are then used when the Dragonborn uses weapons and spells, and engages in combat.

For example, in the Jinx example clip below, you can see The Loose Cannon’s manic shrieks, cackling laughter, and salty sarcasm in action as she tears around Whiterun, firing destruction spells and causing chaos in the otherwise peaceful little mountainside town.

There aren’t mods to bring all 150 of LoL’s Champs to Tamriel’s frostiest region just yet, but there’s a fair number to pick from already – and the modder’s linked to an online poll they’re hosting to let fans vote for which one gets a voice mod next.

If you’re keen to add some League of Legends voices to Skyrim, you can find the list of mods available via Kanjs’ Nexus profile here. As ever, mod at your own risk! And do take a look at our LoL patch 10.19 notes if you’re a League fan – there’s a brand-new Champion and some snazzy new skins on the way you’ll want to see.