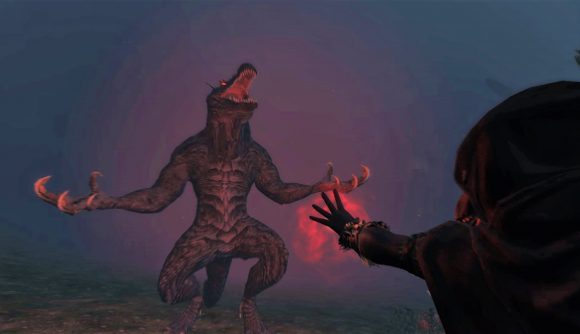 Remember that Khajiit Alfiq Skyrim mod that lets you add adorable, fuzzy, armour-wearing cats as followers? The creator of that mod has now unveiled something a little less cuddly, but equally exciting. One of the Daedra from The Elder Scrolls IV: Oblivion – the dreaded Daedroth – can now be modded into Skyrim.

The Beasts of Oblivion Daedroth mod by creator DracoWarrior729 brings back the massive reptilian monsters you’ll recall from the 2006 RPG game’s, set 200 years before Skyrim. In that game they’ve flooded into Tamriel from the Daedric realms of Oblivion through the gates that have opened up, and with this new mod, they’ll be able to head to Skyrim, too. They’re “back from the Oblivion crisis to bring chaos once again [to] Tamriel”, as the creator says.

From pictures of the mod, they’re a very faithful representation of the previous game’s monsters, towering over the humanoid inhabitants of Tamriel’s frostiest region, and armed with dark grey scales, huge claws, and rows of razor sharp teeth. Gulp.

According to modder, true to its home game the Daedroth even “spits fire” – alongside those pesky dragons that keep swooping down and blasting villages, they should be right at home in Skyrim.

If you’re keen to grab the mod and relive the good old days of invading Daedra, head over to the Nexus mods page here. As ever, mod at your own risk!

You can also have a look at our guide to the best Skyrim mods if you’re keen to add some extra sizzle to your game and want to check out what’s out there. You can now even give the game a Hyrulean makeover with a Zelda: Breath of the Wild Skyrim mod. Neat, right?