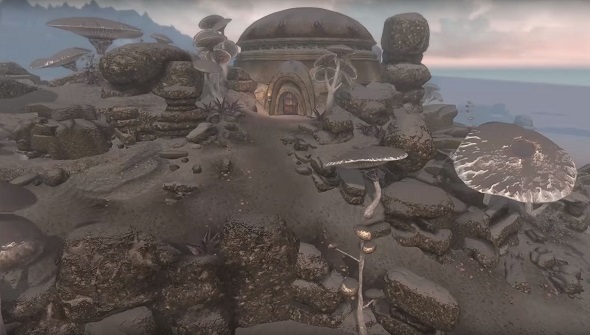 Beyond Skyrim is a massive modding effort that aims to eventually recreate all of Tamriel within Skyrim, and they’ve released a teaser trailer that shows off their work on recreating Morrowind.

Check out the list of our very favorite Skyrim mods.

To be clear, this particular modding effort is recreating the Elder Scrolls’ world as it would be during the events of Skyrim, which is set in the Fourth Era and two centuries after Morrowind (the game).

So while Morrowind players will certainly recognize some of the places that appear in the trailer, things have changed quite a bit since that adventure – most notably the “Red Year,” when the floating meteor Baar Dau falls into Vivec City and causes a volcanic eruption from Red Mountain.

As the camera pans over mushroom forests choked with ash, the narrator tells of how the catastrophe nearly destroyed one of Tamriel’s greatest civilizations.

It’s an impressive trailer, and a monumental project which has no end date set. In fact, they’re still recruiting volunteers to help with everything from level design to voice acting. You can sign up here.

The team has already released their Bruma addition, and that’s available over at Nexus Mods.

Thanks to PC Gamer for the heads up.