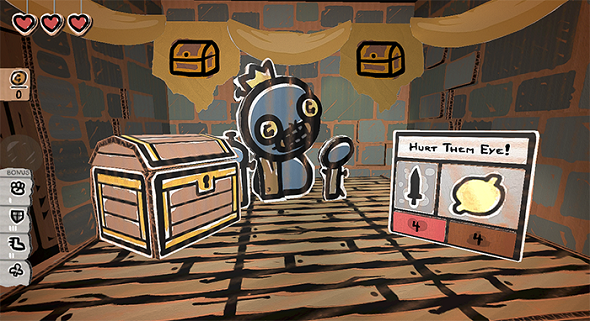 Edmund McMillen owns the warped mind responsible for The Binding of Isaac, and his next game, The Legend of Bum-bo, now has a trailer that shows off some of its roguelike and match-four gameplay flow.

There are tons of terrific indie games out there, and here’s our list of some of the best indies in the past couple years.

We also get some story setup: Bum-bo considers two things to be important, trash and coins. When one of these is stolen by a bad guy, Bum-bo follows him into the sewer, where he fights through monsters by casting spells created by match-four combos.

The presentation is unique, and while The Legend of Bum-bo features a lot of recurring imagery from The Binding of Isaac (notably, flies and excrement), this time around it’s all presented as a moving cardboard diorama.

In a blog post accompanying the trailer, McMillen explains: “Every dungeon bum-bo enters will be randomly generated and much like isaac feature hoards of monsters, bosses, traps, puzzles and randomly chosen spells, so each run will be totally unique and each successful play through will unlock more items, trinkets, playable characters and more.”

McMillen says The Legend of Bum-bo will launch later this year on Steam and iOS, and he’s hoping to bring the game to the Switch sometime next year.