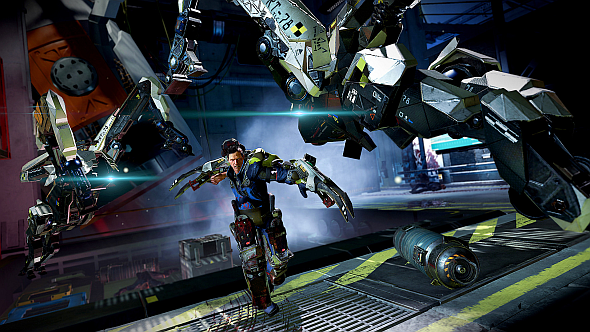 Less than a month to go now until Deck13’s hardcore ARPG The Surge, and as is the way of these things, marketing has transitioned from the vague to the focused. Today’s trailer, for instance, is all about the combat.

To see some combat footage in context, have a watch of Jordan’s duel with The Surge’s first boss.

As we know, you can combine vertical and horizontal attacks to dismember enemy limbs, looting what you chop off. Using your exosuit, you can block, jump, dodge and also duck (no ducking in Dark Souls), to avoid attacks while managing stamina.

The trailer shows protagonist Warren using all these moves to duel an impressive range of enemy types – he dances away from a pair of agile exosuits, ducks the heavy blows of a slower one, and sprints around the lumbering footsteps of massive quadrupedal walkers. We can also see that plunging attacks and kicking enemies off catwalks will be possible.

Deck13 say positioning will be vital, and that the rules of combat apply equally to you and your opponents: you too can get hit in specific limbs, so if you’re hit where you don’t wear armour, you’ll go down faster. You’ll also be assisted by an industrial drone during your journey, which can protect you with shields or attack your enemies by pulling or knocking them over.

It all looks very exciting and varied. Though much has been made of the influence of Dark Souls, The Surge should be changing enough to feel fresh. A good thing, too, as Deck13 aren’t the only ones looking to make a hardcore ARPG now that Dark Souls is finished for the time being.

The Surge is due for release on May 16.