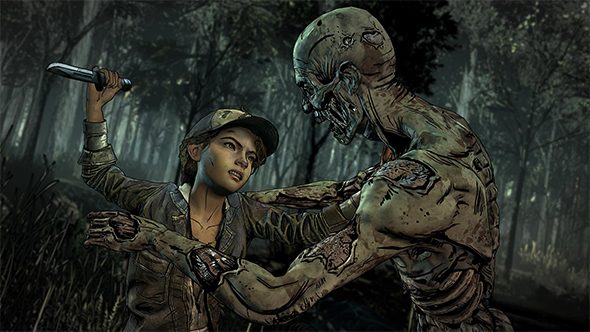 Clementine has been through a lot over the course of Telltale’s The Walking Dead series, and things aren’t about to get any easier in the last season of her adventure. Telltale has posted a new teaser for The Walking Dead: The Final Season that provides some opening drama and scene setting, as well as an extended look at the series’ updated art style.

It’s been several years since the undead outbreak began, and Clementine is no longer the little girl she was in Season One. Now she’s cast in the role of protector, looking after a young orphan named AJ and relying on her own survival instincts and what she’s learned growing up on the road.

The Walking Dead: Season One is on our list of the best adventure games for PC.

Minor spoilers are ahead, so if you want to go in completely blind, consider turning back now and waiting for the game’s August 14th launch.

The scene opens with Clem behind the wheel of a classic muscle car, and AJ in the back seat. The duo is low on food and supplies, and they find a small, long-abandoned rural train station. It looks as though it’s been converted into a home, and a sign out front warns against trespassing.

Clem rings a bell placed out front to signal that she’s ‘friendly,’ but the only response she gets is from a zombie that had been lying in the grass near the station.

Naturally, things don’t go according to plan, and we get a chance to see Telltale’s new chase camera and dynamic combat in action. But the teaser also shows that the classic Telltale decisions are still very much a part of the game, as Clem must decide whether to put AJ at risk opening a locked door, or to snatch a key from an undead couple.

While it’s still very much recognizable as Telltale’s Walking Dead, the Final Season is easily the best the series has ever looked, with deep, detailed backgrounds and subtle lighting and shadow effects.

The Walking Dead: The Final Season is set to launch August 14th, and Telltale says it’ll have players determining the conclusion to Clementine’s story. Personally, I can’t imagine “happily ever after” being part of the picture.