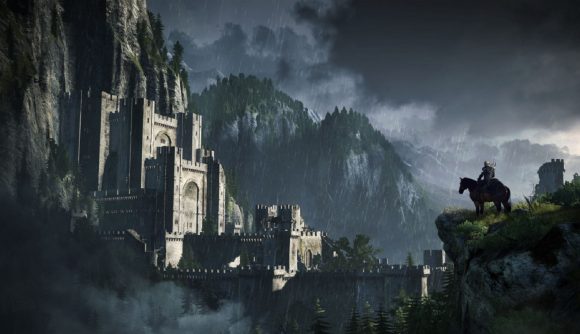 The Witcher has been the talk of the town with the new TV show, Henry Cavill face mods, and of course The Witcher 3’s massive player count. Now to add another awesome thing to the list, a Reddit user has made an AR filter which transforms the cover of The Witcher 3 to look like Kaer Morhen.

Azozea posted a video on the Witcher 3 subreddit of themselves using the filter. When in use, the cover of the Nintendo Switch Complete Edition of the game goes from angry Geralt on a white background to angry Geralt on a Kaer Morhen background. The diorama is rather impressive and it perfectly suits the Geralt you see on the cover. Yellow eyes and all.

Tilting the camera from side to side means you see the gorgeous background behind the Witcher himself. It’s almost as if you could throw a piece of currency straight through at the monster hunter. That is how the song goes, right? I’m sure it was something along those lines at least.

Kaer Morhen is the keep where Witchers are created in a gruelling training and training process. The Witchers, however, are outcasts and ‘unnatural’ in some people’s eyes, so Kaer Morhen was attacked and destroyed, meaning Witchers are few and far between.

The creativity of the Witcher community continues to shine.

Fans are modding in ‘Toss a Coin to your Witcher’ to the game, but if you haven’t played the series, don’t worry – it’s really cheap right now.