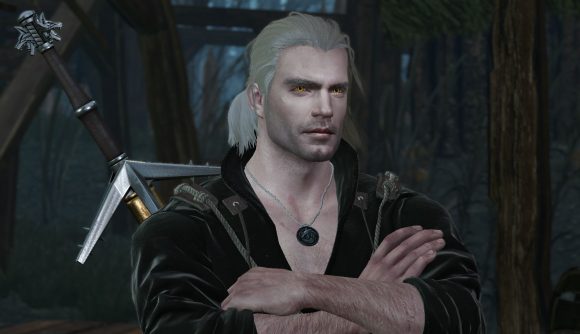 Netflix’s The Witcher is finally here, so we can now see Superman actor Henry Cavill take up Geralt of Rivia’s two swords and battle monstrous baddies in full. If you’ve been watching the show and are inspired by his performance, there’s some good news – you can now have Cavill play Geralt in the Witcher 3, too, thanks to a mod that models the actor’s face over the The White Wolf’s. It’s just got a shiny new update so it’s now more realistic than ever – ah, the wonderful world of The Witcher 3 mods.

Created by Adnan4444 on NexusMods, the mod replaces Geralt’s usual brooding scowl with an astonishingly lifelike version of Henry Cavill’s face – and it includes some extra alterations and features, so you’ll have several different options to choose from. These include body hair textures, as well as facial scars and Toxicity textures replicated from the Netflix show, plus “different face textures for all in-game occasions.”

The mod also adds eyes based on The Witcher show, a new hair colour for Hairworks, a black shirt, as well as some Superman-themed boxers.

That’s not all for fans of the new series, though – the mod also adds a Yennefer of Vengerberg alteration to make her look like her Netflix show actor, Anya Chalotra, including facial textures, a recoloured body, plus eyes based on those seen in the show.

Adnan provides a list of recommended mods to check out if you’re keen to add some more goodies to your game inspired by the Netflix series, like Kaer Morhen armour, toxic black eyes, and alternative amulets. You can grab the mod here – just be sure to follow the modder’s instructions to get it installed and running smoothly.

If you’re yet to decide on whether to check out the show, you might find our roundup of Netflix’s The Witcher Season one review scores handy. The show’s already been renewed for season two, so it looks like there’s plenty more Geralt to come.