The first Witcher game is peculiar. It’s clunky even by 2007 standards, with strange, point-and-click combat, shallow characters and dialogue, and very little shared DNA with its more successful sequels.

I played The Witcher for the first time last year (thank you, pandemic backlog). While the combat is jarring, there’s plenty of promise in its story. With a generous dose of TLC to bring it up to the standards of a modern game, it would make for a great adventure, especially for the 50 million-odd Witcher fans who haven’t had a major new game to play in this influential series since 2016. This got me thinking – what if CD Projekt Red did exactly that? How would a Witcher 1 remake look in 2021?

The plot can stay. When everything else threatened to bog the game down, the narrative and worldbuilding powered me through to the end credits. Long story short, Kaer Morhen is pillaged by a group called the Salamandra, who steal its witcher-making secrets, so Geralt – who’s suffering from amnesia – and his pals split up to track them down.

This quest takes Geralt across the Northern Realms, from Kaer Morhen to Vizima, and eventually to the distant village of Murky Waters. We encounter characters that have since become firm favourites, like Dandelion, Zoltan, Triss, and Vesemir (though no Yennefer, sob). While at a glance it’s a standard story about chasing bad guys across the world, it’s peppered with political intrigue, there are plenty of beasties to learn about (and then kill), and no shortage of the moral quagmires for which the series has become known. None of it is on par with The Witcher 3, but the foundations are solid for a remake. Depending on how much CDPR would be prepared to change, a remake could even raise some quests from mediocre to classic. 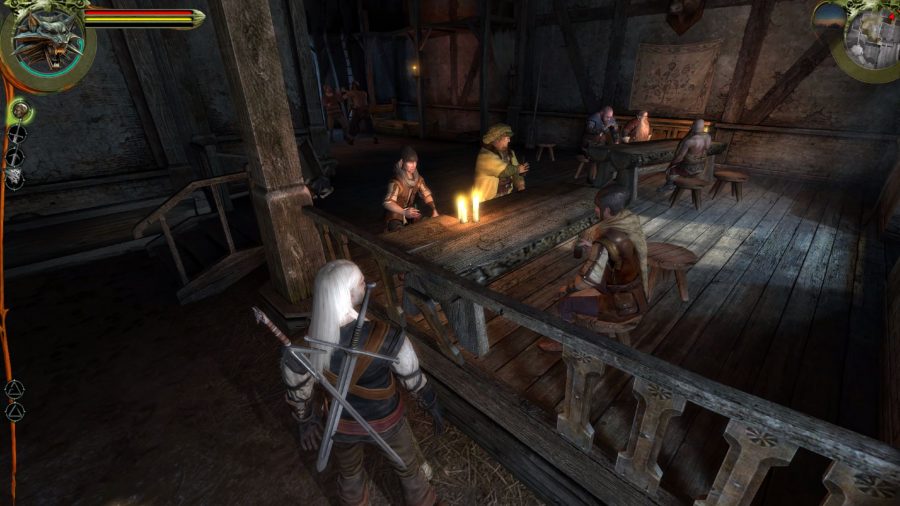 For example, there’s room for a real flashpoint in The Witcher’s first chapter. A major questline culminates in the choice to either side with a persecuted witch called Abigail, or let a mob of angry townsfolk she’s potentially wronged lynch her. I personally found the decision to side with Abigail far too easy because the stakes hadn’t been raised high enough – or even made fully clear, for that matter. It seemed like the obvious ‘good’ choice. And my Geralt’s always a good boy.

what if Vizima opened up into one huge world space, with buildings that reflect Temeria's culture and history?

It doesn’t help that Abigail’s character development is almost non-existent, so I found it hard to get a grasp of the situation (not least because she’s treated pretty disposably, being one of many female characters in the game to be folded into its deplorable, notches-on-the-bedpost ‘sex cards’ system, which I’ll get to later). Ultimately, siding with Abigail is the ‘right’ choice. There aren’t any downsides to doing so, and Geralt is later told that he would’ve helped shed innocent blood if he didn’t. Equally, it doesn’t really matter if you side with the mob; another NPC just hops into Abigail’s place as part of a quest later on and, Geralt’s conscience aside, there are minimal consequences to fret over. The whole questline ends up being a bit, well, damp.

The Witchers 2 and 3, on the other hand, are masterful in their treatment of stories like this. A Witcher remake has the potential to make a real moment of this quest by presenting a double-edged decision like those seen in its sequels. A remake could give us more time with Abigail and the townspeople, letting us better understand their respective plights through deeper, more nuanced dialogue. What exactly are the townspeople afraid of? Could there be some truth to their claims? If so, does Abigail at least have a good reason? Naturally, CDPR should leave just enough unanswered to make this a difficult choice, and perhaps hint at some unknowable but surely dire consequences for good measure. 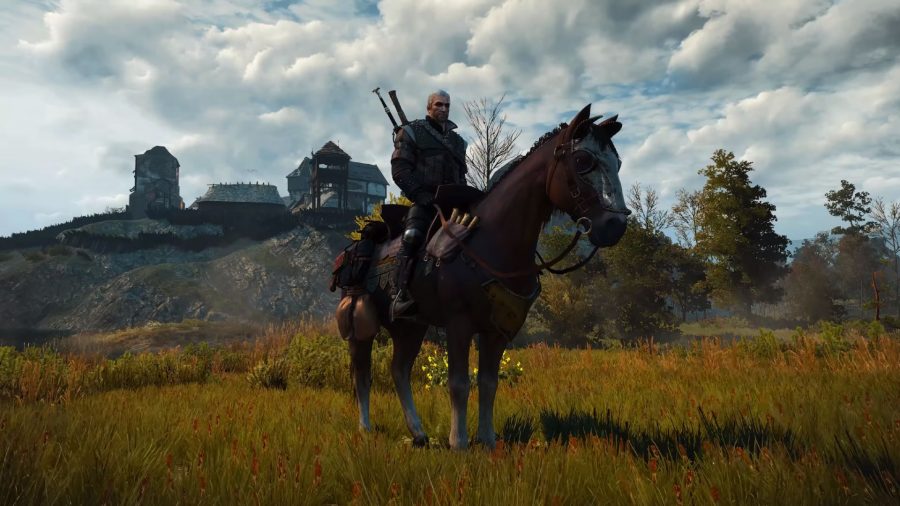 There’s a similar opportunity in revisiting the game’s major story beats. Choosing who to side with between the Scoia’tael, the Order of the Flaming Rose, or, well, yourself, and leaving the ‘source’ child Alvin with either Triss or Shani, could become as iconic as those moments that made you nervously Google The Witcher 3’s ‘good’ ending just in case there’d been a better one you’d missed. It’s one of the things the sequels execute so well – the fear of not knowing what your Geralt’s just got himself into – and The Witcher 1’s plot is already a fertile ground for more of this. With a remake CDPR can adjust the script to add depth, nuance, and remove some of its cornier lines – the plot could be brilliant.

Related: Here are the best RPG games on PC

There’s also the game world. TW1 is far more like TW2 in that it doesn’t feature a completely open world; instead, we’ve got world zones for each chapter and very little backtracking between them. It’s probably expecting too much to add a full open world, not to mention the restructuring of the story that would be required to support one, and in any case the zonal system works pretty well for the game’s opening and concluding chapters. You don’t need a lot more choice, but what if there were a compromise for TW1’s main chapters?

Vizima, across its different segments, hosts most of the game’s chapters. It’s the capital of Temeria – a fortified city nestled safely in the middle of a lake, and built on the foundations of an ancient elven settlement. This doesn’t really come across in the original because of its small-scale zones, lifeless streets, and unremarkable landscape. 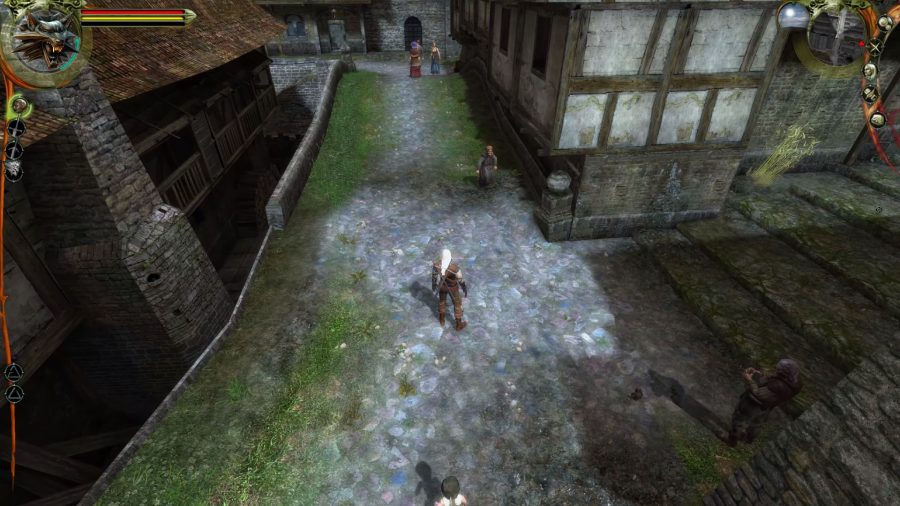 But what if Vizima opened up into one huge world space, with buildings that reflect Temeria’s culture and history, and the opportunity to go dungeon-crawling through those elven ruins? What if we could travel through all of the city’s regions (including Old Vizima and and the swampy areas beyond) without being hamstrung by loading screens or story progress? What if Vizima’s simple streets were replaced by a labyrinthine network of passageways and shortcuts to explore, each packed with people from all walks of life?

It would certainly change the flow and feel of a big portion of the game, but nothing would be lost – it would just become easier to explore and more vividly realised. A remake could make this amazing city – sadly unexplored in the other games – the true beating heart of the game.

Then, of course, there’s the romance. A Witcher remake would absolutely have to do away with the ‘sex cards’ system. This crass approach to romance is a far cry from The Witcher 3’s complex relationships, and essentially makes minor fetch quests – or just saying ‘hello’ at the right time – the only prerequisites to another night of passion for randy ol’ Geralt, with a pornographic trading card of each partner as a ‘reward’. You know, it’s not like keeping trophies gives off incredibly strong serial killer vibes or anything… totally normal behaviour, that. 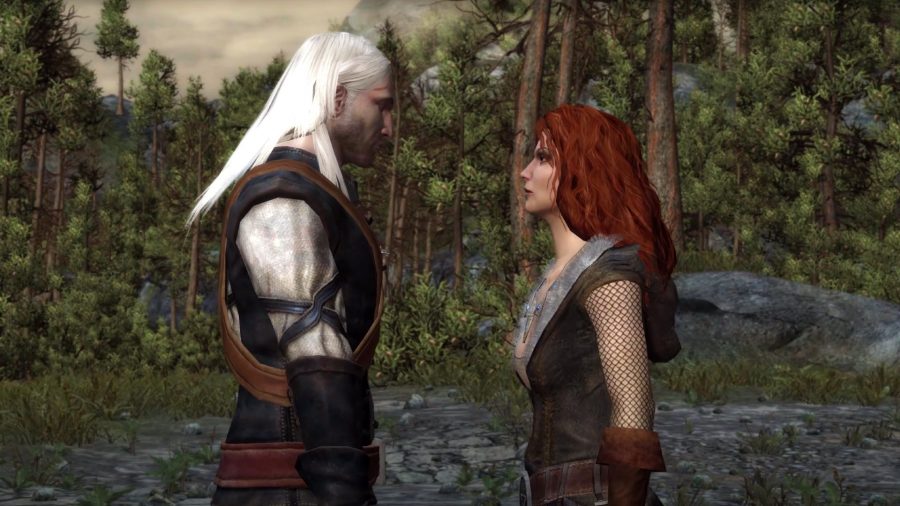 Videogame relationships still leave a lot to be desired today, but what if a Witcher remake could re-do this whole aspect of the game and instead let you build connections with the various folk Geralt meets in more organic, meaningful ways? And if Geralt has the odd one-night stand? Fine, but let’s be less creepy about it.

The Witcher hasn't aged all that well, but it's got good bones

This is the game where we first meet Triss and Shani, key figures in the sequels and important ones in Geralt’s life. What if a remake spent time developing their characters, sending us on new quests with them that allowed us to see them as complex, thinking characters in their own right, as the later games do, and not as conquests? Not only would this be a huge positive in terms of female representation in games (and taste, frankly) – this could also complete a narrative thread that weaves across the whole trilogy, making these characters’ appearances in the witcher’s earlier journeys part of a continuum, rather than some bizarre, out-of-step episode in which Geralt really needed to take a long, hard look at himself.

And lastly, let’s fix the odd, rhythm-action swashbuckling combat. The Witcher series has never featured complex combat in the vein of games like Dark Souls, but its fights were never as outright boring as they are here, and there’s a range of builds on offer in the later games that don’t feel fully fleshed out in the first. 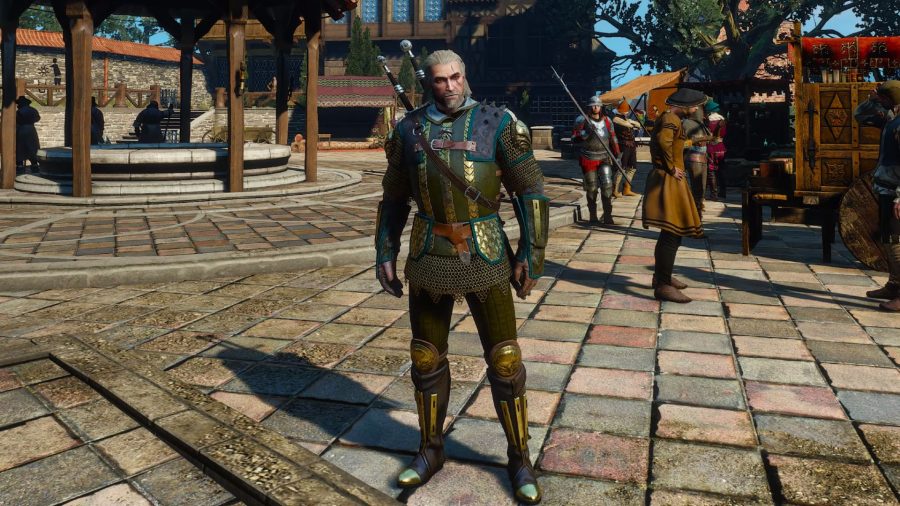 The bestiary and enemies are fine. There’s a lot of variety in these already, and we see several beasties in TW1 that don’t appear in later games, which is exciting in its own right. Sadly, there just aren’t enough options when taking them out. If a remake could give TW1’s entire combat system an overhaul, with TW3’s as a starting point, and stuff a few more combat encounters in, then great chunks of the original that you have to grit your teeth through could be transformed into the memorable monster showdowns that make The Witcher 3 sparkle. This is Geralt’s day job, after all.

While there’s little buzz around the concept of a Witcher 1 remake, CDPR has affirmed that it’s still pursuing development on its “two core franchises“, these being The Witcher and Cyberpunk, so a girl can dream. The Witcher hasn’t aged all that well, but it’s got good bones, and – CDPR, if you’re reading – would be ripe for transformation with a remake that could elevate it to the performance and style of its dazzling successors. And after everything that’s happened with Cyberpunk 2077, a Witcher remake represents an opportunity to garner some good publicity, too.

‘What if?’ is PCGamesN’s new regular feature series – you can read our last entry here. You can also grab The Witcher 3: Wild Hunt here. Check back every Saturday for more hypotheticals, from thoughtful speculation about actually-plausible industry developments, to dream crossovers, to nonsense like Half-Life 3 happening.